This article will attempt to clarify the phrase "clickbait" by providing definitions, clarifying what it is, reviewing the term's history, providing instances, and demonstrating how it can be used for both good and bad purposes.
SIA Team
September 28, 2021 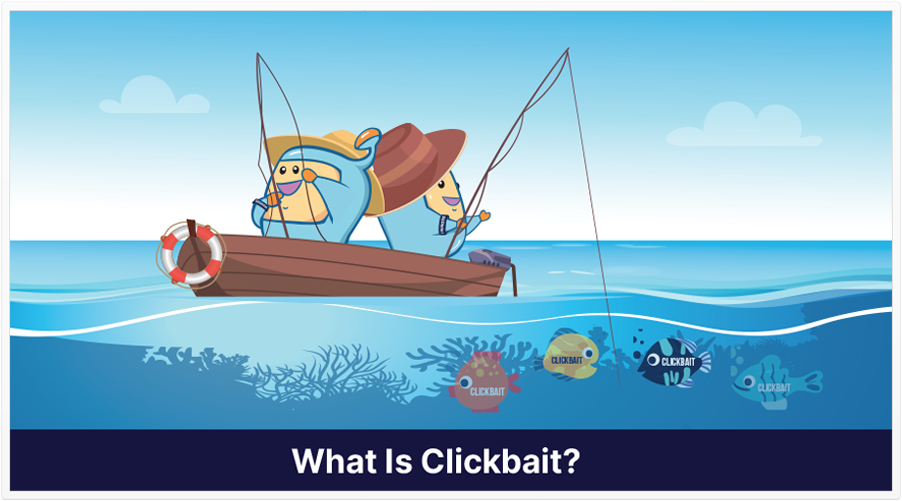 Confusion exists as to the exact definition of clickbait.  The compound word broken down into its root words, click and bait, implies that an attempt will be made to use bait (like in fishing) or to entice a person on the internet to click a link (hyperlink).

This article will attempt to add some clarity to the term clickbait by providing definitions, explaining what it is, reviewing some history of the term, showing some examples, and explaining how it can be used for both good and misleading purposes.

If you have ever been a victim of misleading clickbait, you know how frustrating it can be.

Prior to discussing clickbait, the term should be defined without using its root words.  This is where the confusion occurs as there are several definitions from authority websites which range from clickbait being considered innocuous, all the way to outright bad.  Below are some internet definitions of “Clickbait”:

“Clickbait is a text or a thumbnail link that is designed to attract attention and to entice users to follow that link and read, view, or listen to the linked piece of online content, with a defining characteristic of being deceptive, typically sensationalized or misleading.”

“a sensationalized headline or piece of text on the internet designed to entice people to follow a link to an article on another web page.”

“Articles, photographs, etc. on the internet that are intended to attract attention and encourage people to click on links to particular websites”

Ben Smith, in his 2014 blog post as the Editor-in-Chief of Buzzfeed claimed his website does not use clickbait as he states his website’s headlines under promise and the corresponding content over delivers. They strive to use great headlines that create curiosity while simultaneously are honest and tell you what you are going to read. Based on these comments, he defines clickbait using the intentional deception definitions above.

The difference in the definitions of clickbait, sensationalism versus intentional deception, is a very important distinction that will be explored later. But first let us examine the characteristics of effective headlines and some examples of clickbait.

What would be considered clickbait?

In 2016 Nadya Khoja conducted a study for Venngage.com to determine the characteristics of an effective clickbait title.  She analyzed headlines from 24 high-traffic websites known for clickbait type headlines including The Huffington Post, Upworthy, Vox, Buzzfeed, Clickhole, and Cracked.  The effectiveness of the title was defined as the number of social shares the title accrued during the 3-month study timeframe with some titles garnering an astounding number of shares, greater than 1 million!

shows the number of clickbait elements each headline contained relative to the percent of headlines.  Note that about 85% of the headlines had either 3 or 4 elements (the total of the last 2 columns).

A great way to understand clickbait is to read the examples below which will give you an idea of how they are structured and how to recognize them.

Some examples of classic clickbait headlines are given in Figure 4 and taken from here.

As you can see these headlines are designed to peak the reader’s curiosity and emotions, and to create an irresistible urge to click the link to read the article.

I searched the internet to find an example of misleading or intentional deceptive clickbait that piqued my interest a bit (for journalistic purposes only), “Mel Gibson’s Mansion Is Larger Than Entire City”.  I thought to myself wow that must be one incredibly large house.

Well, after viewing 37 pages (Figure 6: After 37 Pages Still No Mention of Mel Gibson’s House), the article still hadn’t shown Mel Gibson’s house, so I finally gave up.  Journalistic curiosity only goes so far.  Keep in mind that these articles show one house at a time, take forever to load, and load some ads delayed.  The delayed ads are particularly heinous as you think you’re pressing the “next” button to go to the next page, but before you do, the page switches position so that your mouse in now over an ad and you guessed it, you’re taken to the ad page.  After at least 30 minutes, I was incredibly frustrated that the article hadn’t delivered on its headline’s promise.  I knew that this ad was misleading clickbait beforehand as I had fallen for similar ads in the past.  The good news is you learn to recognize them, so you can avoid them.

A Brief History of Clickbait

According to Merriam-Webster’s time travel site, the first known use of the term clickbait in print was 1999, although they do not state by whom and where it was used. Grammerist.com gives credit for inventing the term clickbait to a blog posted in December 2006 by Jay Geiger.  Although this is not correct, he may have popularized the term.

Why is clickbait an issue?

When a headline and article are disjointed, the reader loses trust in the author and/or company and is much less likely to continue a relationship.

Trust is built through integrity which Merriam-Webster defines as “firm adherence to a code of especially moral or artistic values: incorruptibility”.  A practical way to think about integrity is to act as if you had a video camera attached to your shoulder while people you respect, like your parents, are watching.  Integrity is when you know they would be proud of your actions.

A headline should be a promise to the reader as to its article’s topic.

Clickbait can be a major issue if the headline is misleading or deceptive, whether intentional or not. This will have negative consequences on the relationship between the reader and the author.  As we all know trust is difficult to earn and is earned over a long period of time.  Think of the author and reader as a relationship, and as in any relationship each side gives a little more of themselves as the relationship progresses.  But if one person is dishonest or abuses that trust, the relationship slides backward fast and may end depending on the severity of the event.

Why Should You Be Careful Using Clickbait to Promote Your Business?

People do business with people they know, like and trust.  First, your prospect must get to know you usually through your marketing efforts.  As they do, if the relationship progresses, they start to like you. Finally, they start to trust you which is when they are receptive to becoming a paying customer.

Using misleading clickbait headlines shows a lack of integrity which diminishes trust and can slow down or halt the progression of readers getting through the know, like and trust cycle.  This can cause irreparable damage to your brand as an unhappy customer typically will tell 9-15 people about their bad experience, while a happy customer will tell only 4-6 people (BeyondPhilosophy.com).

Can clickbait be good?

Yes, clickbait can be good. Please keep in mind that all articles are written to be read which is their primary purpose. Assuming this is fact, the title is the part of the article that entices the reader to click on a link so they can read the article. Some sensationalism by stimulating emotions and curiosity in the headline can be good, if it entices the reader to click to the article and if the headline accurately describes the article’s content.  Neil Patel, a well-known internet marketer, concurs in his blog post, “Why Clickbait Works [And Why You Should Do More of It]”.

Authors use clickbait for one simple reason, it works, and it works well!  It will increase your CTR which in turn will increase traffic.  This shows Google people are interested in your articles and is likely to increase your SERP (Search Engine Results Page) rankings.

As more people read your article and realize it has good information, they are more likely to share it socially which should act to increase readership.

Obviously, clickbait can increase brand awareness. The more that people read your article, will start the know, like and trust cycle. Figure 8 shows a familiar TV character actor stating how clickbait increases the success of his brand. (Photo credit)

A curiosity gap implies there is new and valuable information available on a topic thus creating the incentive to click to discover it.  A great headline will create curiosity and/or stimulate emotions making it difficult for the reader not to click and read the article.

Be original and creative, but not misleading

The key to writing good clickbait headlines is to be original, creative, and stimulate curiosity and emotions, while accurately describing the article’s content. Here are some ideas on how to write an effective headline, “The Anatomy of the Perfect Headline”.

Where do you find clickbait?

Clickbait is pervasive on the internet.  Of course, the gossip sites have it, but many of the well-respected news sites sell their ad space to companies that provide clickbait headlines, like the example article shown previously about Mel Gibson’s house from news.yahoo.com.

How can I recognize it?

Clickbait is effective in improving CTR and can be good if the headline accurately describes its article. The author’s honesty and integrity are paramount.  An honest headline that creates curiosity and stimulates emotions will entice a reader to click to read the article. However, one should use common sense, when evaluating headlines for clickbait.  If something seems outlandish and too good to be true, it probably is. If so, minimize your potential frustration and avoid it like the plague.  “Caveat lector”, let the reader beware!

Can You Gain SEO Benefit By Building Links to WP-Admin?
Can You Affect the Rank of Multiple Pages Simultaneously with the Same Shortened URL by Changing the Destination URL?
Company
Resources
Products
SIA Login!
Learn