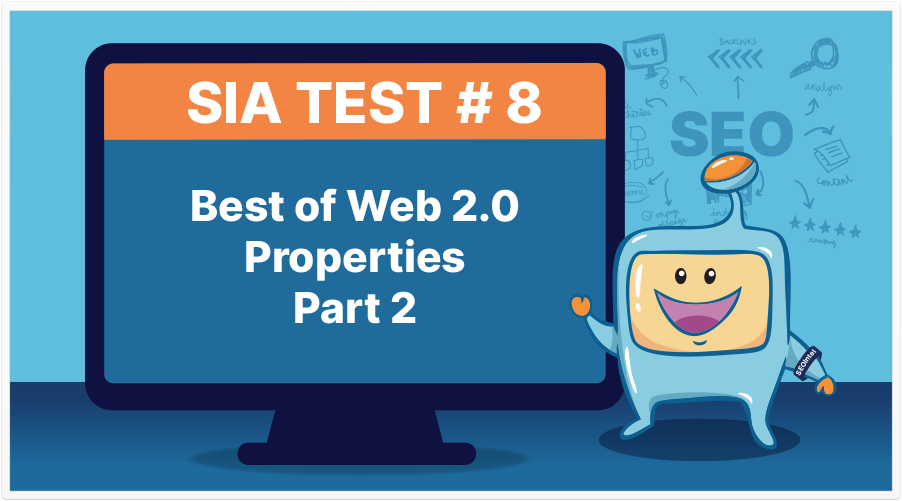 In this round two of the Web 2.0 test, we included some lower DA properties, as well as some properties that SEO programs like to promote such as Kinja and Medium. We read in a forum that you could build a Squarespace site for free, so we also put them in the mix. We wanted to see if it would be similar to building a WordPress.com site (it’s not). We also put in Issuu as it is one that we have personally found to be strong.

Same as the first test, we created identical pages on 10 Web 2.0 site to find out which ones Google likes best.

The Jury is still out on these

We did another video, I believe it was number five – the test video number five, we talked about that set of web 2.0s and testing them against each other. And this one we have seven more that we added into the mix. Not necessarily added in, we just tested these in two separate bunches.

And then we had some winners. So this Kinja, wiki.edu, Medium and Edu blogs actually took the top five and Squarespace and the Ucoz. I never really messed with Ucoz before, I avoided those or declared those as to avoid, and it just didn’t help very much.

They’re not all necessarily bad. I mentioned in test five, the blogspot one, avoid that one. But some of these are actually pretty good.

The downside comes when methods are automated because automation makes it easy and they can build a whole bunch of them. What happens is when you can build a whole bunch of them, you get sloppy, and then you’re making junk. And as a platform gets more and more junk, eventually it loses its value. And in the case of Blogspot for example, Google just shut it off or made it a negative SEO experience for you by using them for link building. And that’s what happened to Hubpages, Squidoo, and a lot of these web 2.0 sites. They just took steps to eliminate the link juice so that people would stop spamming their systems.

While we like to use these, we’d like to be responsible with these platforms. In my opinion, Medium is probably the best one on this list. You have to test and see what’s going on with these.

So we’ll continue to do these and release these best of web 2.0 lists, test the two against each other, and see if you have somewhere to put on that you’d like to add to there and see if they are helping you, are they hurting you, or are they just doing nothing? So it’d be something good to know.

Did you think we were closing this test series at that? Move on to the third round of this test where we put the winners of round 1 and round 2 head to head. Check out our test articles list.