Which is the best metric to consider?
SIA Team
September 21, 2021 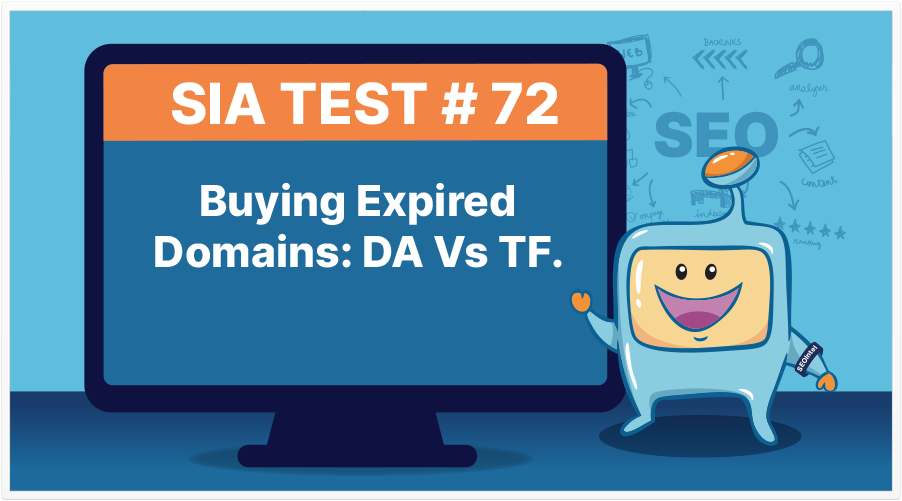 When buying expired domains for 301 redirects or PBNs, which metrics should you consider, DA or TF?

We wanted to test the difference between 3 domains:

The whole set up for the test is:

The winner is the high DA site. Google dropped the others from ranking (not deindexed, just not shown in SERPs).

The test was run again with two other sites added in mix, and the high DA site wins again.

You really can’t rely on just one metric. It’s not as easy as “get at least a TF 15 or DA 20”, and you’ll be good. It was interesting that the high DA won in this test.

In this video, Clint discusses this test and his insights on site metrics and tools.

In this case, this test is an older test so I’m not going to go too deep into it. The long and short of it is that, the setup with a high DA link and a lower trust flow than the other two links, that one actually won the day in this particular test.

So in this test, DA beat trust flow. We have since redone this test and tested it against different metrics. In particular, its DA, Trust flow, and URL rank. Those are the big ones that are out there Moz, Majestic, and Ahrefs. Semrush has their new thing now and originally, that database was actually built off of the back of Majestic but they do a lot of their own crawling and stuff and it took, it was only a matter of time before they came out with their own thing. SEO Powersuite in the tools all together, have one, it’s called Inlinks or Inrank, and that’s their metric.

So what are all these things for? What value are they? And the long story short is that all of them are estimations of the power of the site based off of what is known in PageRank or about PageRank and how those sites chose to organize their link analysis. And it’s all based off of their database of links that they’ve found.

So, whereas Google probably has found 2 trillion web pages, these sites they’re in the billions, maybe millions or maybe the low billions, versus Google. And all of their databases are all different and they’re all started off at some set of seed sites, the beginning.

In Majestic, for example, they had the Majestic million, this is their beginning and they crawl out from there and then they use that to determine trust flow, topical trust flow, and CF. But they all do that. So there’s Moz with DA, Majestic with Trust Flow, and Ahrefs with URL rank and domain rank and it’s all based off of the data that they have.

Whereas a lot of link buyers and stuff, they have DA and it’s not to say that these sites are better or worse because of what the tools say about them. Low domain authority site, ergo it must be bad site. That’s not necessarily the case.

However, we need a filter. We got to have something. There’s so much data out there. There’s so many websites out there. We need metrics like DA, Trust flow, and URL rank to filter through that noise and help you pick.

So when people say – oh DA is better than Trust flow or Rrust flow is better than UR, it’s really a prejudice based off of the learned application of those metrics in your day to day SEO.

So if you are always going by DA, you have a harder time switching over to you UR because you got to figure out how does that come up, how did that come about, what is it, what does it mean, what is the numbers that I’m kind of looking for to create my filters, you have to relearn all that stuff. So you inevitably become a DA fan over UR and you’re the one who’s in the Facebook groups, or whatever, saying DA is better than DR or you’re the Moz, or the Majestic fanboy or fangirl who says Trust flow is the best because your SEO has been doing your SEO based off of these metrics for so long, you have this built in bias.

The same is if you’re using Trust flow, or DA, or Yandex for PR, just get used to the metric and you apply it to your SEO. And as your experience grows, you know that a Trust flow 15 or a DA 20 or a Yandex converted PR three, you know that those are just good filters for you. And now, it will help you with your decision making process. That’s the value of these metrics. Do I wish the PageRank toolbar was back? I certainly do. Do I ever think Google’s going to bring it back? I don’t think so. Because they’re trying to get people less and less to use backlinks as a thing and SEOs are jumping on that bandwagon. Well somebody, I’m not. I’m still using backlinks quite extensively. But that’s why PageRank is gone. They don’t want you to know that the website that you’re reaching out to, to get a guest post from, as a PA or PR of four and they don’t want you to use that metric as a decision thing to decide if you want to buy a sponsored post, or buy a sponsored link, or buy an ad or whatever, over there. They want to eliminate that type of thing.

And these other metrics, DA, Trust flow, UR, and Yandex PR, are all just replacements for that to give you best guesses, since we don’t have access to the real thing.