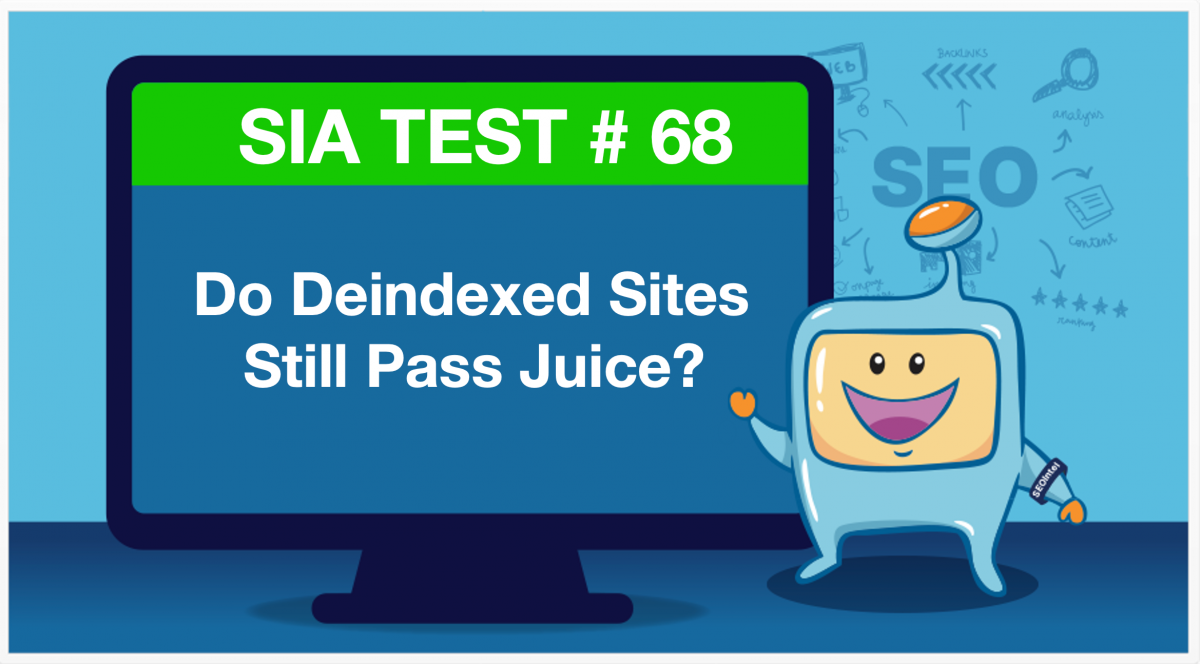 There are a lot of opinions when it comes to deindexed sites and most are towards how they do not work, they do not pass juice, and are a waste of time. For those who have PBNs that have gotten deindexed, one dilemma that they have is if they should be kept live or if they should just be deleted. In this test, we see what the real deal is when it comes to deindexed sites. Keep them or delete them?

Five pages with test keyword in 8 places and lorem ipsum text are placed on the test site and submitted to Google Search Console. Within 3 days, the pages indexed and we added a link from the 5 deindexed sites, aimed at the #3 page.

Within 3 days of adding the links from the deindexed sites, the target page moves up one spot in rankings from spot #3 to spot #2.

After 4 days, the test page moved up to the #1 spot, showing that deindexed sites still pass juice.

This has a great implication for those who have had sites deindexed. You can leave them online and work in getting them indexed again, knowing that the existing links are still passing juice.

In this video, Clint discusses this test and his insights on deindexed sites.

This test is pretty interesting. It comes from the idea that, let’s say you have a private blog network and somehow, you got caught and your blog network got deindexed, but you don’t have messages in the search console for those saying that they’re penalized or anything, they’re just deindexed. Now, standard thinking would be, that because they’re deindexed, Google doesn’t like them and ergo, if you have links from them, they won’t count. That’s standard thinking. Or you build a backlink on a site, and if the page doesn’t index, and then ergo, that page, doesn’t count. If it’s not in the index, then it doesn’t count.

This test has debunked that theory. So what we had was access to some old domains, they used to be part of a private blog networks, blatantly, part of a private blog network and the sites were deindexed. There was no manual penalty in Search Console or anything, they were just no longer being shown in the index and that’s actually quite common these days, regardless if the site is good or bad, a domain or specific pages on domains will just be taken out of the index, we don’t want it anymore, we don’t need it, we have 100 to 600 pages that are better than this one, ao thanks for coming, but we’re not going to put in the index.

So Google obviously knew that or recrawled it, didn’t index the pages but – oh there’s a link there, and counted that regardless if it was in the SERPs and not being displayed in the primary index, at all.

That’s not to say that those sites are not in the secondary index, the one that we don’t see in Google’s catalog goes and says, yep, that’s the site, it’s there, we’re just not going to show them in the primary one. And that’s entirely possible. So I would argue that you probably have to have a page in the index at least once and that would definitely ensure that it’s in the secondary index.

But at a minimum, if you’re creating backlinks, you just worry about getting Google to crawl it, put it in its catalog of pages, that would be in the secondary index that has all of the sites around the world versus what’s shown in the search results and that is how you get credit for links. And I’ve been following that process forever. And there’s a whole bunch of other people, you’ve either heard me or maybe saw this test or heard someone else from SIA talk about this test after we did it.

Because before that, no one no one was talking about it. No one’s talking about do deindexed sites count? But there has been consistent talk about – your backlink is not in the search results, it’s not on a good site, ergo, Google’s filtering that out. Well, we debunked that here with the deindexed PBNs tests.

Not only do we use deindexed sites, we use deindexed PBNs and are still ranked number one. That is debunked, as of the time of this test is certainly something that would probably have to be consistently checked over and over and over again. But I’m not sure that it would be something that we have to check on every update. This would probably be more like a bi-annual thing just to make sure that it still applies.

But my guess is, it’s not going to go away until Google is essentially using AI to answer all search queries and then in so much as to say, eliminating SEO altogether and just kind of formulating this system that says – hey, these are these sites that are near you for local business, or this is the answer for your thing, because now they’ve decided that their algorithm knows everything, all the world’s knowledge, etc. and we don’t need information websites anymore because Google will be able to provide that to you directly in their search results, that kind of stuff.

But I don’t see us getting to that level anytime soon. So with that, we’ll keep testing this one. But it’s still cool, still interesting to know and it still supports some other testing we did like link Echo, and etc., to show that if the page is in there, and the link is there, and Google’s still counting it, and is still being applied in the algorithm at this time.