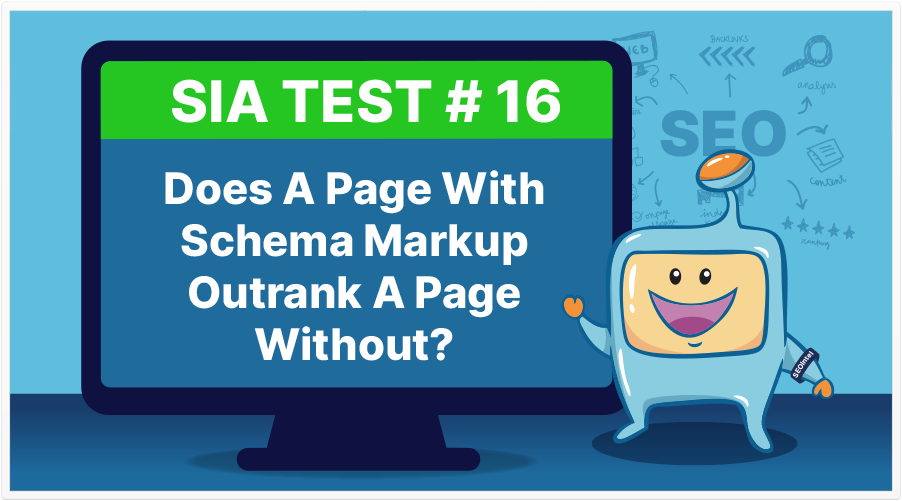 Most SEOs are already familiar with Google’s stance on schema. In September 2015, Barry Schwartz published a popular article in SearchEngineLand where he quotes John Mueller that schema markup is not yet a ranking factor, but may be a factor in the future. As schema is supposed to help Google discover what a page is about, and we were going to put the keyword in the schema, we think that a page with schema will beat a page without schema and that it is indeed a factor in Google’s algorithm.

For this test, 2 pages were set up with 400 words and 2% keyword density. The experiment page had a product and offer schema at the opt of the body tag, while the control page did not. This was tested twice, using the same test set-up but different keywords.

In both test one and test two, only the page with schema is indexing. The pages without schema are not appearing in the results, even though they have been submitted to Google.

Both test one and test two confirm that a page with schema markup outranks a page without schema markup. Schema has been the next big thing for a long time and Google has repeatedly denied using schema for its ranking algorithm.

We think we are finally seeing schema as a factor and we recommend to start marking up your pages. As a member of the SIA, you have access to a json-ld schema generator. That tool is what was used to create the schema for this test. Now is the time to use it to take advantage of this edge before the competition figures it out and start applying this to their pages!

In this video, Clint talks about this test and his insights on the use of Schema.

This is Test Number 16 – Does a Page with Schema Markup Outrank a Page Without?

I think this is a test from June 2016. This is back when schema was just getting popular.

If you remember, there were a lot of plugins coming out. There were a lot of people that were talking about adding schema to pages. And it was new. Not a lot of people actually jumped on it. As a matter of fact, it was like – oh, just a waste of time. There’s no sense in doing that, etc. and John Mueller back then said in September 2015, that schema markup is not yet a ranking factor.

I honestly believe that it’s probably still not a ranking factor, but they are using it in conjunction with the rich snippets, right? So you see the reviews, you see carousels, you see video, thumbnails, all that stuff inside of the search results to pretty it up and increase CTR for Google, is all driven pretty much by schema.

And lately, this radio is recorded in March 2021. But lately, you can’t go to an SEO blog without learning about Rich Snippets and increased visibility, and how you should capture those snippets, etc.

So, we know that schema is important now.

Back then, in June 2016, we just didn’t kind of grasp how much we can actually leverage that. To this day, I’m kicking myself for not jumping deeper into schema earlier on than I have already.

What ended up happening is the control pages never indexed and the schema pages indexed.

We are seeing or we saw something that we haven’t seen before until last year, which is the filtering. And that came out after Google announced that they were going to limit the amount of pages from a single domain that were ranking for a single keyword. And we all remember that and it was all scary and new, everyone’s terrified. But really, at the end of the day, you couldn’t really find too many instances of it because Google, while filter will still give you two or three pages for that term. Let’s say you do 10, like we’re doing now with our testing, you do 10 pages for a keyword, nine times out of 10, seven of those pages will actually index but then get removed, and then you end up with only three pages in your test set. So that’s a filtering and we saw that here in June 2016. The first example of that being applied as part of a test. And unbeknownst to us, we just didn’t pick up on it.

That’s the joy of testing though, we get to see multiple results and most multiple things and how things are affected by what we do. And in this case, it was our first indication that we probably should have taken the schema a lot more seriously. And we should have looked at it a lot more deeper and implied it beyond the basics of what you can get in a plug in or what you can get when you’re just following the Google guidelines. If you just do what Google says and everybody just does what Google says, you’re at the standard for it and if you want to get more benefit from it, you got to go a little bit and beyond that.

Enjoyed that test? We have more tests on schema. Clint also has a schema course and it is free to SIA Members. Check out our other schema tests and be a member to access the course for free.

Myth Busting: Should You Only Place the Keyword Once in the Title Tag?
Myth Busting: Optimize Your Meta Titles For Clicks Rather Than Keywords
Company
Resources
Products
SIA Login!
Learn