Does H1 Around Your Images Give A Ranking Boost?

We put the question to the test. Does an H1 tag around your images boost your ranking or does it actually hurt your SEO efforts? Read more to find out.
SIA Team
July 9, 2021 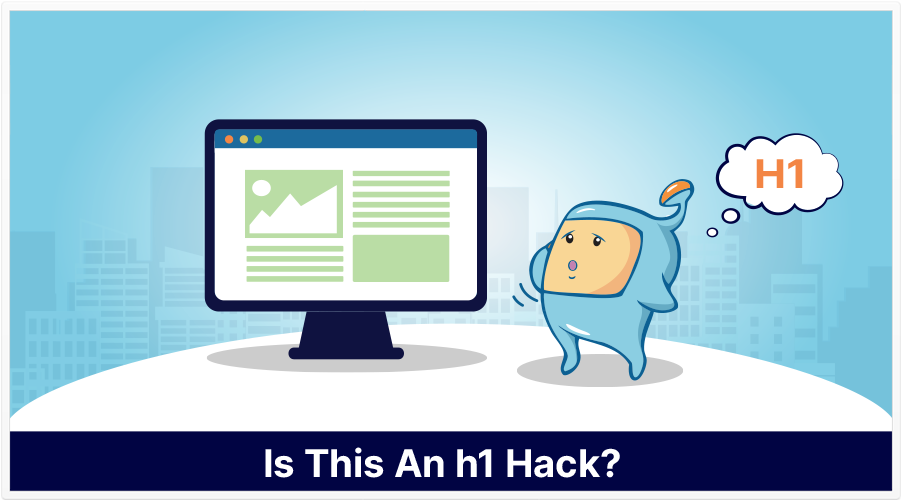 While the subject of h1 around your images is not a new one, it is something we see frequently as SEOs. The real question is, does it give you an extra benefit or does it hurt your SEO?

We tested it for a true scientific answer. Let’s start with the basics first.

H1 tags are called header tag element.  Header tags are a summary of the topic you are discussing.  Heading tags are important for ranking in the search engines.

Title tags can also be completely separate from header tags.

The importance of the H1 tag in SEO

The h1 is a way to tag something as important to Google or other search engines.

For SEO purposes, we want our keyword or keyphrase in our H1 tag.  This gives Google the first indication of what your page or post is about and what keywords to rank you for.

How do I get H1 tags

If you use WordPress, you are probably familiar with WordPress titles.  Most themes automatically make your titles H1 tags.

This is the first onpage SEO element your visitors will encounter on your page.  Besides being the largest letters on a page, the title will tell your visitors (and Google) what your article is about.

Most themes do this, but not all.  It’s always a good idea to double check to make sure your theme creates the H1 tag for you.

There is an easy way to check if your theme is creating your title as an H1.

If your title is an h1, you will see the following:
<h1 class=”heading_title”>Your keyworded title goes here.</h1> If you don’t see an h1, then you will have to manually add your h1 tag.

How to Create the Perfect H1 Tag for SEO

If WordPress does not automatically do your H1s for you, here are some general guidelines to creating perfect h1 tags.

The short answer is yes. Since 2016, wrapping an image in an h1 tag has become a practice some SEOs use.

If you run across this, you’ll typically find logos wrapped in h1 tags, especially found on the home page.

Remember, the h1 tag usually gives Google and the reader a key to what the article is about.

Here’s a question to ask yourself: Would an image give enough information to have Google understand your page correctly?

Should you put an H1 tag on an image?

Just because you can, doesn’t always mean you should. Back in 2016, we became aware that many sites were using an H1 tag on an image file.

We were both surprised and intrigued to see many SEOs starting to use this.

It quickly became known as a super hack.  But is it really?

We decided to test it to see if you should put an H1 tag on an image.

What happens when you put an image file in an H1 tag?

There’s three theories as to why SEOs would wrap an image in an htag:

In the HTML source code, the final result of an image inside h1 example would look like this:

Why you shouldn’t put an image in an H1 tag?

There doesn’t really seem to be a definitive answer that an image in an H1 tag is harmful for SEO when used prudently.

If your goal is long term stability, anything done in excess could have a negative consequence either now or down the road.

It’s best to lay out your site with clear semantic headings that make sense for the search engine to understand what your content is about.

Sometimes a theme will wrap the images in an h1 by default.  As one marketer stated, developers can create amazing themes, but their brain works very differently from an SEO’s.  What’s good to a developer can tank an SEO’s site.

It is recommended you always run your site through a software like Screaming Frog to do a site audit.  This will alert you to any potential issues with h1s that you might not be expecting.

Don’t be alarmed if you see that Screaming Frog lists this as a major onpage error.  It is fine to have a couple of h1s on a page, if the design calls for it.  If it is excessive or not what you intended, it may be best to use code to clean it up.

As an alternative to Screaming Frog, you can use this free online tool to check your h1 tags.

On October 3, 2019, John Mueller said Google’s algorithm is fine with a couple h1 tags.  He stated, “Our systems don’t have a problem when it comes to multiple H1 headings on a page.”

H tags are basically meant for text not for elements

If you look at Google’s guidelines, you’ll find the following: “avoid embedding important text in images for elements like page headings and menu items. To ensure maximum accessibility of your important text based content, keep it in regular HTML”.

Should I Use the H1 Tag for My Website Logo?

This is best answered by first knowing the goal of a website.  If the website is very small, it might make sense to have the logo wrapped in an h1.

You may be limited on keywords and even content.

Here’s 3 websites that use their H1 for their logo:

Here’s 3 websites that do not:

The Results of our SIA Test [Test #2]: H1 Tags Around Your Images

Back in April, 2016 we tested if wrapping an image in a H1 makes the image become a super image.  Did we find a super secret hack?

An SEO professional called to say he has been called in by a company to consult. The company has an inhouse SEO guy that mentioned a ninja hack and was surprised that he didn’t know about it.

The hack is that you can wrap an image in an h1 and it becomes a super h1 or super image.

Since this idea has been spread across the internet, we tested it.

We had two pages. We pitted them against each other.

For round 2, we did a multi field test where we got one super h1 against a whole bunch of other ones and the idea was to see how it fares.

Result: Round 1: The result was No, it isn’t any kind of super special hack that gives extra ranking power.

Round 2: It lost again. It is simply not a boosting factor.

While this was tested back in 2016 and needs to be retested, we think that it will remain a busted myth.