Does Using CloudFlare Boost Your Rankings?

Will using this popular platform give you an edge?
SIA Team
July 27, 2021 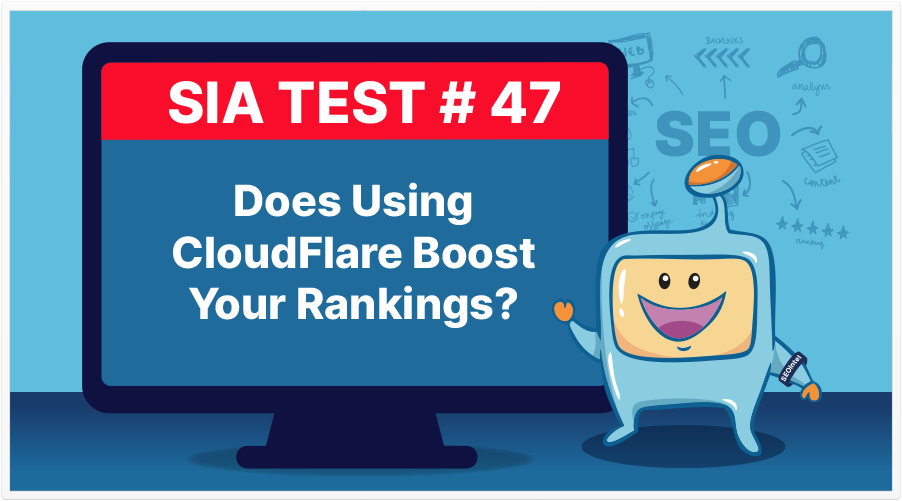 Cloudflare states that once your site becomes part of the Cloudflare community, it’s web traffic is routed through their intelligent global network, automatically optimizing the delivery of your pages so your visitor gets the fastest load times and best performance. They block threats and limit abusive bots and crawlers from wasting bandwidth and server resources. This results in significant improvement in performance and decrease in spam and other attacks.

Due to these claims, a lot of SEOs use the service in hopes that the better performance being offered will lead to better rankings. There are some people that says that if has no effect on rank, and there are some that says that they do help with rank. Carin, one of our SIA members/testers decided to stop listening to the debate and to test it herself.

For this test, three domains were purchased and hosted. WordPress was installed on all three and she waited until they were all indexed. Once indexed, Carin chose the 2nd ranking domain to use CloudFlare with.

Site speed shows that the site using Cloudflare is faster.

However, will this be enough to affect rank?

After two weeks, the only change that was seen was the indexing of 3 additional pages on the site where CloudFlare was used. We have seen the results dance around a bit but the ultimate result is that the site with CloudFlare remained in the #2 position, where it started. This shows that Cloudflare, in and of itself, is not a ranking factor.

In this video, Clint discusses his insights on this test and on his use of Cloudflare.

To CloudFlare, or not to CloudFlare. That is the question in test number 47.

There’s multiple reasons to use CloudFlare and also multiple reasons against it. The ones that I have here against it are typically – oh I had this one site and the site went down and it was all CloudFlare fault and I’m never going to use it again. Well, okay. And then the other one is – hey, CloudFlare is designed so that your sites actually never go down. If you push the wrong button, you can break some stuff as with any form of technology, and plus, you get the benefit of being on a CDN – content delivery network, that also happens to be leveraging the Google database data centers. Your websites are going into the Google Data Center via CloudFlare caching and being spread across the world. How impossible could that be a bad thing.

The other benefit of CloudFlare is there’s actually a firewall system in there to help you defend against attacks from nefarious partners, they do have a nice set of IPS and stuff that they block. And you can actually go in there yourself if you want to unblock various countries and depending on your pain level that you’re having in there, you can do more or less.

The general recommendation that I give to everyone is, at least be on the free one. I, from a PageSpeed optimization perspective, I never saw any benefit from being on the paid. But again, you get some of the features. Just be careful, because there are some things in there that tend to break a lot of websites. The system called rocket loader, that’s one of them and that just never really played well with my WordPress websites.

But there’s other types of CMS. Not everyone uses WordPress, just 33% of the internet. But I digress. So you can check that out and see if it’s right for you.

There’s also another feature in there that actually speeds up your pages even more, it’s kind of like a pre rerender thing. I have whatranks.com on that and that makes it a little bit faster too.

I don’t use it on Digitaleer. It costs $5 a month and I don’t notice that much of a difference from my optimization settings basically to what they’re doing. But what ranks.com is leveraging Elementor and it’s a little bit of a drag on PageSpeed optimization. So I use the extra $5 a month and just pay for that from CloudFlare and it’s working out fairly well and it’s doing a good job on that site.

But is it going to boost your rankings? Nope.

The only way it could actually – probably, if anything, it would hurt your rankings and the only way it would do that is if your server went down, the cache and CloudFlare went down or you had some kind of setting in CloudFlare and one of those hidden pay plans that I’ve never managed to find but it could cause some issues without an SSL, you can have some issues with some minification and stuff and just some conflicts like that. But quite frankly, you can do that on your own without CloudFlare.

But in general, just it being there isn’t going to hurt or help you which is actually a good thing because there’s lots of websites pushing through CloudFlare and the idea that you could be associated with a bad website, this kind of just throws it out the window.

Being on CloudFlare doesn’t hurt, doesn’t help, it’s just been just good for security and for speed. Which is probably the number one benefit I use it for – security and speed.

When It Comes to Multilingual and Multi-regional Sites, Which URL Structure is Stronger?
How to Buy Expired Domains (2022)
Company
Resources
Products
SIA Login!
Learn