There are many different opinions when it comes to LSI. Some think LSI is a ranking factor, some think that it isn’t. We tested this to see what the real deal is.
SIA Team
August 31, 2021 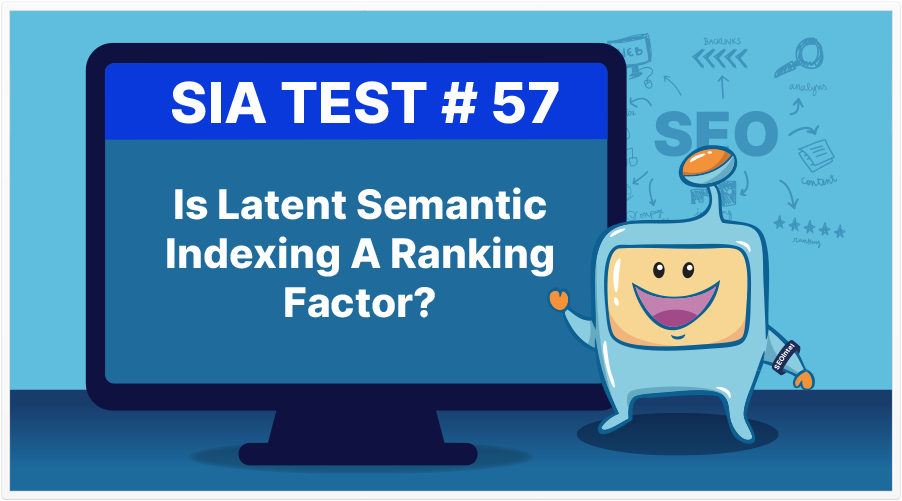 Latent Semantic Indexing or LSI is a concept that is even controversial to define or explain. An important point to remember is that LSI is actually part of a document retrieval system (what search engines do). LSI looks for related terms to give you the most relevant document. LSI is often confused as just synonyms or close variations of a target term, but synonyms and variations are just a portion of LSI.

A better way to think of LSI is that LSI are terms that naturally come up in a conversation about a particular topic. As an illustrative example, if you are talking about a new car, you may discuss the engine, the wheels, the steering and handling, fuel efficiency, etc. None of those things are synonyms for term ‘new car’ but are terms that naturally arise in the conversations and these are what are called as LSI.

There are many different opinions when it comes to LSI, even the definition of what it is, even varies among SEOs. Some SEOs even take LSI as synonyms. Some think LSI is a ranking factor, some think that it isn’t. Let us put this to the test and see what the real deal is, and if you should be using LSI in your content.

A tool that we like to use for LSI is nTopic and it is the tool that was be used for this test.

For this test, 2 pages with 500 words and a 2% keyword density was set up. The same keyword and meta title was used on each page, and both pages were identically optimized for the target keyword.

The experiment page included LSI and nTopic’s LSI score for it was 80.93%`

The Control Page had the LSI replaced with random English words in the exact place that the LSI was placed on the experiment page. For comparison, the Control Page’s nTopic score was 36%.

In order to get LSI terms in the first place, we used a random set of words as the target keyword phrase that would produce limited results. We used the search phrase: florist causeway pedestal. For this search, the results returned 47,000 documents. Compared to other searches, 47,000 documents is a relatively small amount of search results.

Use LSI to get a real edge in your SEO practice. A critical point to remember is that LSI does not replace the usage of the target keyword.

In this video, Clint talks about this test and his thoughts on LSI and super LSI or entities, and how to create content taking note of LSI and entities.

This is SIA Test Number 57 – Is Latent Semantic Indexing (LSI) a Ranking Factor?

This is a  pretty old test. However, even though it’s old, it’s still relevant today, except the differences today, instead of looking at little strings of words like who, what, when, where type of words, we’re looking at the new LSI. The new flavor of LSI is actually the use of entities in your content. If there’s any doubt in that, you can look at tools like Inlinks, Surfer, Cognitive SEO, Clearscope, Marketmuse, even SEO Powersuite is trying a little bit to get into the entities game, Text razor, they all leverage entities. And the reason they’re leveraging entities is because Google’s figured out using them machine learning techniques that most of us talk about certain persons, places, things or events inside of our content in relation to that specific topic or that piece of content.

So if you’re doing a piece of content about baseball, you might talk about baseballs, the baseball diamond, the baseball stadium, CenturyLink Field? Well, that’s football, what the hell is >Mariners field, or we’ll go with New York. If you’re a New York fan, you’re talking about the Yankees, the Mariners, the Giants. So those are all entities.

And so, we’ve transitioned, I don’t want to say away from LSI, but it is not as important as the super LSI, which is the entities now. Regardless, this test still matters and it tested LSI pages, pages that are optimized for with LSI versus those that were not.

In order to do that, it didn’t use a fake keyword, we made up one – so a Florist Causeway Pedestal. So if you think about this as a florist, a causeway is kind of like a hallway, and then pedestals that you’ve put on it. So it would make sense and there’s actually 47,000 documents, according to the search results, saying that it’s kind of a thing, okay.

One of the pages was optimized, using LSI and the other one, the places where the LSI were, were actually replaced with just some English ipsum, random set of words inside of those places. And as a result, you got to keep the keyword density the same and you didn’t mess up the LSI test.

LSI, you can still do and Ntopic is still there. I think there’s a couple texts SA, that are still out there. I know WebSite Auditor from SEO Powersuite still has it in there and plus the tools like Surfer, Cognitive, Inlinks, etc., not only bring in the entities, some of them are actually doing a little bit of LSIT, because you can look at some of those terms that those tools bring in and they’re not entities, but they are common words that you see in there.

My recommendation is find yourself a good LSI tool that you’re looking at, and edit your content out, and then put it into the Frase, and then Surfer, optimize it with the entities, round that out using Inlinks, and then publish it after you’ve cleaned up the grammar and all that other stuff with Grammarly, or whatever your favorite grammar checking tool is, and you’re going to see some really good results. And that’s well optimized, well written content, and it actually reads real well. It’s not “SEO content”.

The ordering process is pretty simple and I can show you just a little bit of how that would look like. If you want to order, you have your content outline, right? And in that content outline, you can use your tools like Frase or whatever, you’re going to essentially have your H1s, your H2s, H3s, and then your H4s.

The way that I do the outline, for me, I’m always going to have the exact match here (H1) and I’m always going to have the exact match in my last H4. And the reason is, this is the introduction, and this is the conclusion. And so, when you’re thinking about writing in paper, this is my topic, this was all about, and this is what I said, and now they’re wrapping up and I’m closing that topic. So that’s why these are always in here. And in here, you have your other terms, you can do that stuff out.

So when you’re sending this off to the writer, all you have to do is send them this, okay, don’t tell him to write an SEO, don’t give him the keyword to write about, this is my topic, this is what I want you to write about. And you can put your keyword in there, if you want to like – Top Five RC or top five drones for amateur pilots, right? And they’ll go out and following this outline, write your content for you with zero considerations of SEO in their minds.

Now when they’re doing this stuff here, when they’re putting it into the outline format. At the end of the day, they’re going to be writing for SEO. You just don’t have to tell him that and then you don’t have to argue about how good or bad SEO content. They’re writing it for you and you’re getting it done.

Then you put this inside of an LSI tool and if it’s written in that way, like I just said here, the LSI scores are going to actually be pretty high, you’re not necessarily going to have to worry about a whole lot and that’s where the entity stuff comes in.

Where you’re getting a little bit trouble is if you’re getting into harder competition terms, etc. Then that stuff, at some point, it’s just not going to work anymore because Google knows it’s a backlink focused keyword like on page optimization, I can write a nice content piece about on page optimization, go through all the writing tools, score everything I want to, and still not rank. Why? because that term is primarily driven by backlinks which is a lot of irony right there.

For this purposes, do this, write your content out in this outline, and then the LSI will take care of itself but it is still helping you rank.

Image Optimization: All you Need to Know
Is Time On Site A Ranking Factor?
Company
Resources
Products
SIA Login!
Learn