Myth Busting: Putting The Target Keyword First In Your Meta Title Gives You An Edge 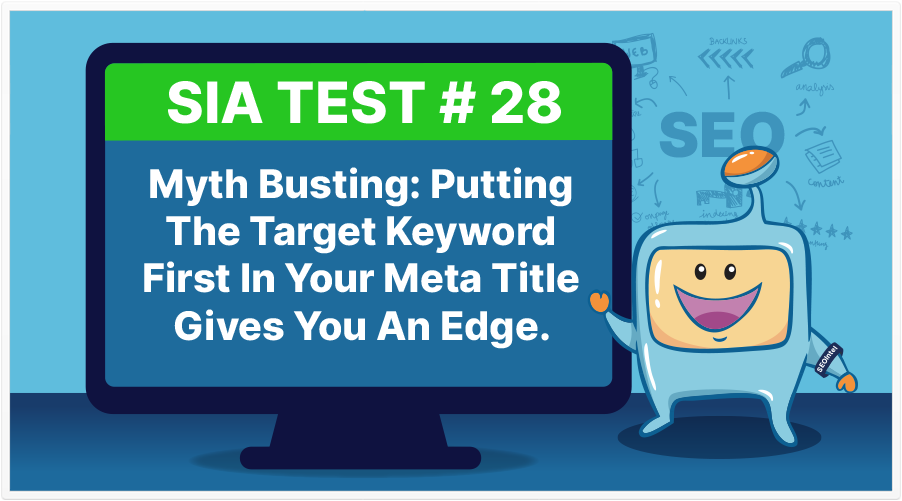 This test was derived from a discussion in the SIA Facebook forum regarding keyword prominence in the meta title. We decided to test it. We will test to determine if placing the target keyword in various places in the meta title can impact rank. Common practice says that placing the keyword first – the most prominent – is the best placement for ranking. We check the truth behind this.

For this test, three identical pages were set-up with the keyword placed in the beginning, middle, and end, of the title tag. The test was repeated with an additional keyword, to ensure the results were consistent.

For both keyword one and two, the meta title with the keyword at the end won.

This myth is busted. Keywords in the end of the title tag beat keywords in the beginning. However, these are what we call muddled results and are indicative that there is no SEO benefit to a particular placement. It’s possible, though unlikely, that putting the keyword in the beginning might be a negative factor. But the bigger take away is that the myth of putting the keywords in your meta title for an SEO edge is a bust.

In this video, Clint provides his feedback on this test and his insight on where to best place your keyword.

This is test number 28 – Keyword 1st in Meta Title.

The concept behind this test is a lot of recommendations that were going on that you should have the keyword towards the front of your meta title. And as a matter of fact, I did another video where I gave an example of writing a meta title and it wasn’t really all that complicated but wooden pipes was the keyword we chose and then I added a hyphen and then I did some blah, blah, blah stuff here to make it better.

The idea behind this test is to see if it’s true that you should have your keywords towards the front or if it even matters from an SEO perspective. We tested moving it around, so we put the keyword at the end, the middle and the beginning, and then the end, the middle, or beginning in the middle, just to see where they would all rank out.

You may want to actually continue putting your keywords up front, if anything just for the increased CTR benefit out of it and not necessarily the direct SEO benefit. If you’re a believer in CTR and the more clicks you get in the search results, the higher your rankings will go up because Google thinks that your page is more relevant based on user actions, then it is a direct SEO effect.

Anyway, that’s how you use it. Just keep putting your keywords up front, make it clickbait, and get on with it.

We have more myth busting in store for you! Check out our test articles for more details.

Web 2.0 Duplicate Content: Does It Hurt A Page’s Rank If The Exact Same Content Is Posted To A Web 2.0?
Open Graph VS No Open Graph
Company
Resources
Products
SIA Login!
Learn