Myth Busting: Will Overuse Of ALL CAPS Harm Your Page? 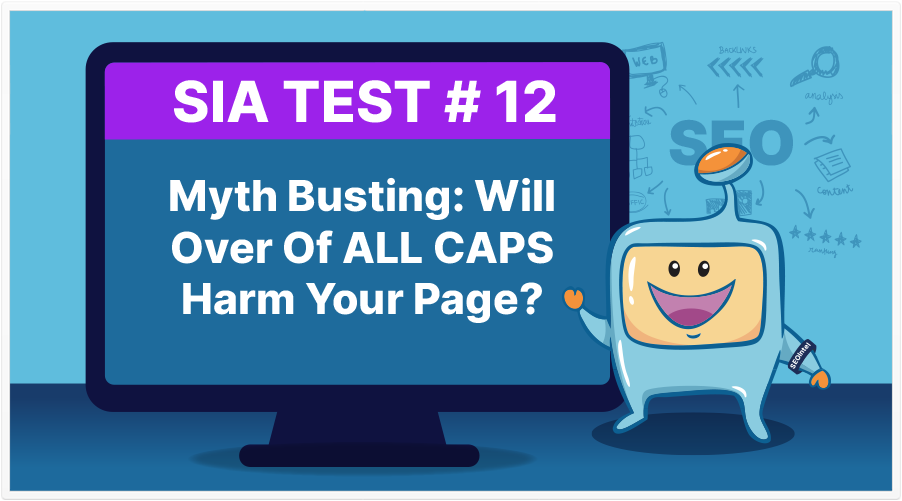 The idea for this test was sent in by SIA members, as they have frequently heard that the overuse of capitalization or all caps is harmful and is a negative factor. So the question is, does Google perceive this as yelling at them and drops a page down, or do they even care about the format of your content? Are they even aware that the text is in all caps since it is not in an html tag?

For round one of this test, pages with 400 word articles and 2% keyword density were set up. The test page had 6.5% of the content in upper case, 75% of the target keywords were in upper case.

For round two, it had the same test set up as round one though using a different keyword. Pages with 400 word articles and 2% keyword density were set up. The test page had 6.5% of the content in upper case, 75% of the target keywords were in upper case.

It looks like this myth is confirmed and is 100% true. At no point during the test did the page with heavy use of caps outrank the control page. The page with no caps also indexed first, and has maintained rank, and continues to rank.

What’s great about unexpected results is that they help you evaluate your understanding of how things work. At John Limbocker’s conference years ago, he discussed the idea of making a link stronger. He argued, based on reading Google’s patents, that you can make a link stronger by manipulating font size or color. The rationale behind this is that a link is “strong” if it is likely to be clicked. A link with bigger fond is more likely to be clicked and will be stronger than one with smaller font. It stands to reason then, if Google can see things when they are bigger and subsequently rewards you for that, then you can also overdo it and get penalized for it.

In this video, Clint provides his feedback on this test and his insight on Google and the use of All Caps.

This is test number 12 – the overuse of ALL CAPS, is it a myth? Can you use all caps? Can you not? Is it gonna hurt your rankings? Or isn’t it? Let’s find out. Let’s get into it.

This actually came from a member of SIA, the member had a site audit done and he or she was told that their headlines in their articles and some of their articles were overusing the caps, the shift control lock, just type out and go to town.

Obviously, there are some fonts that all look like caps, but they were using all caps too much and the idea was that it was actually hurting them.

The initial instinct is – that’s crap, that ain’t gonna happen. And we figure that Google doesn’t read font size and doesn’t look outside of the HTML tags. And well, it will see the font size in the tag, but at the end of the day, it really doesn’t matter, right? That’s just kind of implied with us.

And then there was this theory by Adele Garcia, and looking for the source of this. So I’m trusting the write up, versus actually being able to find the source. But they mentioned that keyword density and optimization don’t apply to the search engines, or his theory or her theory, Adele. I’m assuming that’s a female. Nope it’s a he. Was that Google actually strips out all your HTML code and then all it saves is the content. The works, that’s all I’m saving, and then that’s what it’s called categorizing and basing on. And that’s a theory. It’s a theory. Obviously, we know now, that’s entirely incorrect.

But it’s a theory. Right?

But this test, actually, it debunks that. So with the results, what happened was, there were two rounds of tests, and it was tested twice.

And then round number two, by the end of the test and basically what that means is we leave these tests running for 45 to 60 days, just to give some changes, see some variants. Maybe Google’s got our testing in a sandbox? Who knows, right? So we leave it going.

So by the end of the test, the only pages that were indexed, were the control pages, the test pages were gone.

So what does that mean?

What doesn’t make sense to me is why Google would care. Like if your design and your font for a heading, to get it to look the way you want, you have to put it in all caps. Why would that affect your search rankings?

It just doesn’t make any sense to me and why Google would care. And then when you think about it, it could be emphasis and you’re diluting the emphasis of the page because if everything is yelling, or if everything is jumping up and standing and shouting, you don’t hear anything, right? So think of it that way. So if everything is emphasized on your pag,e in your headline, then none of that headline is really standing out as differential, which could be an indicator why the test page dropped.

So in the short term, if you’re doing that, if you’re using all caps in your headlines and you’re stuck on page two, let’s change your headlines to no longer use all caps. Maybe change your font. So that looks like all caps, but it’s not all caps, you know what I mean, and see if you get a ranking boost. I don’t suspect you’d get a big one, but you might get something. And this is pretty interesting. This is definitely something we’d relook at again and just see if it’s still in our negative do not DO list.

Enjoyed this test? We have more tests on content formats that we think you might be interested in, too! Go to our test articles to go through them.

Original VS Stock Images
Myth Busting: Should You Only Place the Keyword Once in the Title Tag?
Company
Resources
Products
SIA Login!
Learn