We retest some of our link building tests to see if they are still effective post Penguin 4.0.
SIA Team
September 15, 2021 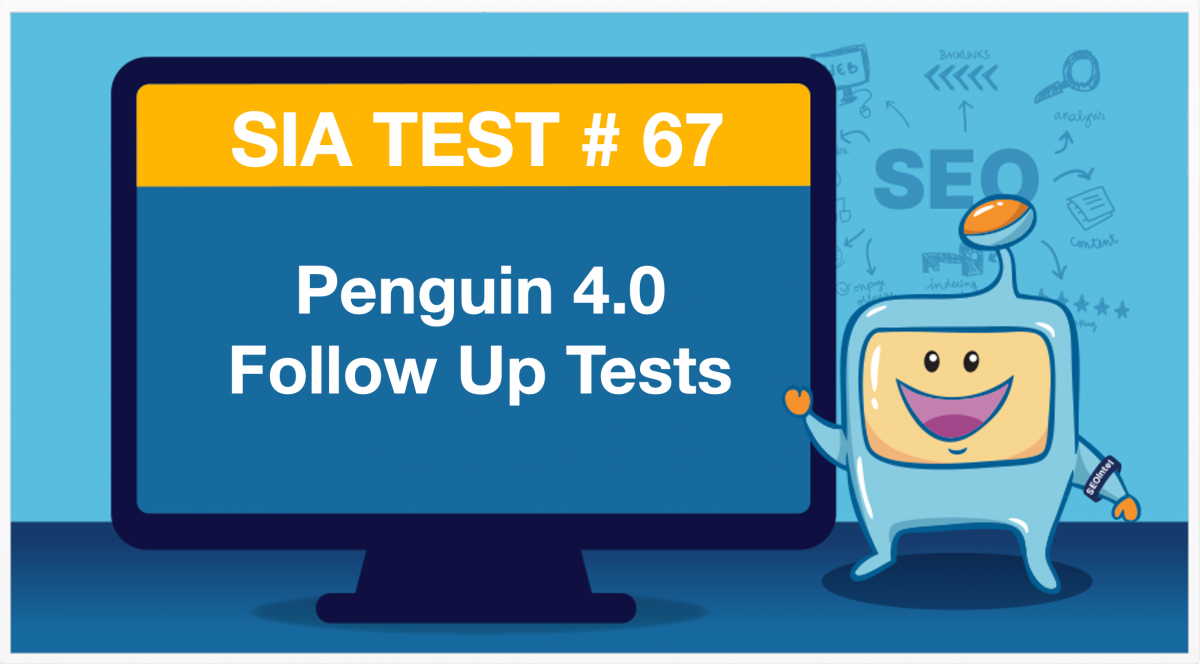 In this follow up test series, we go through our previous link building tests to see if there are any changes to them after Penguin 4.0.

In this test, we set up a new page on a new domain. The page was optimized at 8% on the homepage. Initially, our URL was ranked number 4. The next step was picking a spammy link provider to send 10,000 backlinks with the anchor text ‘green sandwich pepper monkeychair’ to the homepage of the site. For the next 5 days the URL was ranked number 1. We then fired 20,000 spammy links, and the site stayed at number 1.

We fired another round of spammy links to this site, post Penguin 4.0. The results hae not moved. The test site is still #1.

In May 2016, a test has been done to determine if paid links affect the ranking. Google tells you that buying links is a big no-no, but how can they tell if you’ve purchased a link or not?

We set up a test with three pages and had 10,000 blog links link to the middle ranking page. The anchor text used in this test identified the links as paid links, literally. The anchor text varied from phrases, such as: ‘paid link,’ ‘this link is bought and paid for,’ etc. The target page went up to the first place within a few days.

After the Penguin update, the test page moved back to its original place in the #3 spot, but was not dropped from rankings. Of our link building tests, this is probably the best example of how Penguin 4.0 works. It appears that the links have simply been discounted.

We sent a new batch of paid links to the test page and didn’t get any movement. While the word “penalized” might be the wrong term, one of the aspects of Penguin 4.0 is page level application. As the test page has been flagged, it’s interesting that a new round of links didn’t provide any movement.

Five identical test pages were set up. Once the links were indexed, we set up a drip feed links campaign to point 400 backlinks to the #3 URL. 100 backlinks contained exact match anchor text (25% of the total links) and 300 backlinks contained name/brand anchor text (75%of the total links). Initially, there was no movement. Probably the result of the backlinks not being indexed the moment they were pointed. Then, the test page dropped one spot. A few days later it shot to #1 and has stayed there.

We fired another round of links with a 25% anchor text profile post Penguin 4.0. The target page is still #1.

In this video, Clint discusses these tests on link building, post Penguin 4.

It’s the start of the all-powerful Google, in the eyes of the majority of the SEO community. Like, we rely so much on Google to clean up our backlinks, for example, that we just say Aaron recommends that people totally ignore all their bad backlinks to your site. That’s horrible advice, by the way.

As a caveat, same applies to the high-quality content standard because of high quality content, why does the rhinoplasty Plano website still rank inside of the search results for rhinoplasty Plano? And if you don’t know what that meets is, there was a test for Search SEO Signals lab, there was this contest, and Kyle Roof made this page, and he made it all in lorem ipsum, and it ranked, and ranked number one eventually.

In the high quality content arena, that’s this belt, it’s not high quality content, Google cannot read as good as everyone says it is. It’s looking at zones and because of the zones, and it finds a keyword is going to rank the pages for those keywords. That would never get a rhinoplasty client, it will never convert. So for users, it’s useless, right? But from the SEO perspective, it’s interesting, and it’s interesting to know those placements.

It’s the same with backlinks. So in here, there’s three tests.

One is can you trigger a natural link penalty, what does it take to kick it and how many backlinks can you get before the penguin algorithm comes up to you and says you got an unnatural links?

In that set of test, the page is optimized at 8% keyword density and the page ranked number four initially, and then the link provider sent 10,000 links to it.

The second test is paid link, so known sites that you buy links and they actually bought paid links on blogs, 10,000 of them, like if nothing’s going to trigger it, paid blog link should do it right? 10,000 links and the anchor text in there said that these are paid links, so it’s kind of like getting a guest post on or this post as a guest post, or this blog was contributed by guest author. In that case, the links had the anchor text identifying it as this is a paid link. So test keyword – paid link.

Backlinks with the exact match anchor 3% and this was in the days when people were saying, Oh, you should never have your exact match anchor above one to 3%. Anything higher and Penguin is going to get you. Well, we set that 25 and we want to see what happened.

The second one, the page dropped from the number one spot to number three spot when the paid links were set. And keep in mind, the anchor text said – Hey, this is a paid link. If they left that out, I bet you it probably stayed at number one, because it’s keywords like sponsored posts, sponsored partners, our sponsors, those kinds of things associated with the section of the website where those links happened to be, could be addressed by Penguin. And were looking for terms like how Panda is picking out guest post now, guest author, guest contributor, that kind of stuff was tested and you can actually see that those pages did not benefit, the linkings were not counting.

But a lot of people say – hey, you’ll get penalized for paid links. And in this case, Penguin didn’t penalize the site, it just didn’t give any credit for the backlinks. It filters those backlinks out because it was associated with paid links via the terms.

That whole idea that you can’t go any higher than one to 3% for Penguin and exact match anchors was false. It’s still false to this day. But there are still limits, right? So don’t go out and just do 25% anchor text to all of your pages because Google ranks this particular test number one, it’s not what that means you still have to do a little bit of smartness.

If all of your competition has, let’s say, you’re in web design, web design is really cool. So you do web design Dallas, you look at the anchors, and I haven’t looked at it recently, but you’re probably going to be in the 25 to 30% range of all those websites that are ranking for that, have exact match web design Dallas. In one tool or another, you’re going to find that.

If they’re 25 to 30, you could probably go to 33 to 35. And take over that search result, provided all the other SEO stuff is equal or above the board, and everything across the board in the on page stuff, right? But if everyone has a 5% exact match anchor, you don’t want to go in there with 35 because now you’re the crazy outlier. And that crazy outlier is easy to pick up. So the math wise, you’re looking for averages and in the means right. So and you have the highs and lows, and the average and you want to figure out what the highs and low are, figure out the mean is, and then go try to get a little bit above the high. And that is how you use that anchor text percentage today, when you’re building your backlinks and stuff. So it’s no longer Oh, 3% or less, it’s look at your competition for that particular keyword, see what they’re doing. Find out the average and the mean that Google, that the algorithm can easily figure out, and then you’d be a little bit above average. Don’t go crazy speed a little bit above average and then add until your ranking the position you want. And then you’re done with the link building which makes a whole lot easier, a lot smarter and better than playing darts with your link building campaigns and hoping that you’re going to get a bull’s eye.