Web 2.0 Syndication Part 2: What Type Of Content To Use

This test is part 2 of Test 27 where it was tested if syndicated duplicate content can hurt or help rank. In that particular test, we found out that linking identical content to a page with the same content is not a good idea and can cause a ranking drop. For part two of this […]
SIA Team
July 20, 2021 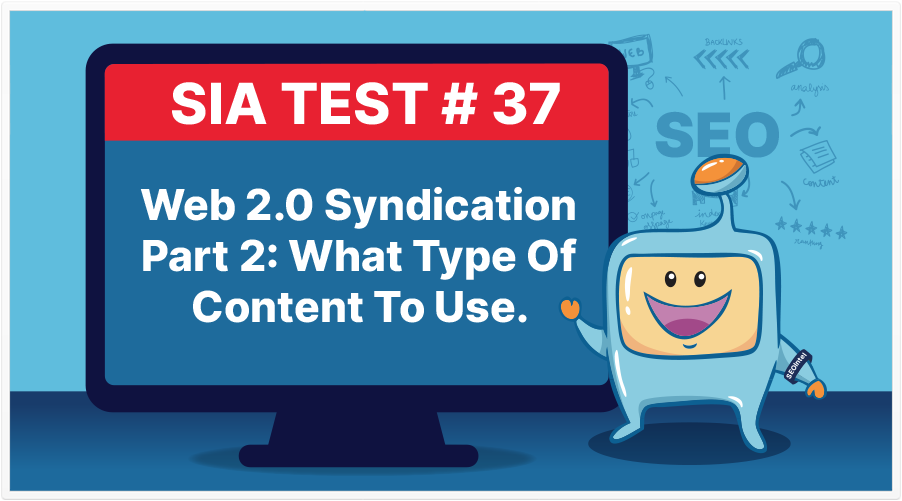 This test is part 2 of Test 27 where it was tested if syndicated duplicate content can hurt or help rank. In that particular test, we found out that linking identical content to a page with the same content is not a good idea and can cause a ranking drop. For part two of this test, we set up three tests to check the use of different types of content in syndication and what their results are.

For this test, Blog.com,Tumblr, and LiveJournal were used as we wanted to come close as possible to a real world implementation since this type of backlinking is promoted by Syndwire and IFTT style content syndication platforms.

This test was composed of a three part test, that used 3 types of syndicated content:

For test one, that uses a blurb or short description from the original content, it has taken nearly a full month of waiting but the test page has moved form #3 to #2. However, the LiveJournal page that contains the content and back links is not showing as cached.

For test two where a spun version of the original content was used, there was no change in the serp results and the blog.com page with the content and backlink is not showing as cached in Google.

For test three which used duplicate content, the test page where the link was pointed did not move and stayed at #3. It took a little time for the Tumblr page to index, however, it was much faster and took less effort than the LiveJournal and Blog.com page. This comes as no surprise as we have tested Web 2.0 properties before and Tumblr is high up on our strong Web 2.0 list.

When it comes to syndicated content, it would seem that the best course of action is to use a description or blurb and most likely a good spin. Using duplicate content can cause either no change in rank, or the worst, a drop in rank, based on our testing.

I’ve actually tested this recently. This is one of the older ones where we kind of rolled out some tools and stuff. In particular, sites that we thought were just, frankly, it’s just not doing any good or end up doing what it’s figuring what we assumed was kind of a waste of time with some of these websites, but here’s the idea.

You have IFTTT network and it syndicates to whatever site. In this case, we pick Livejournal, blog.com, and Tumblr to test.

You can syndicate in three ways you can just do the backlink, you can do a spun version of the content, or an excerpt of the content, or you can do the copy of the complete article. So full syndication, partial syndication or just a backlink. I mean, one of the testers when we use these three sites to do it, because well I don’t believe there weren’t any other tests before, maybe the Tumbler was, but I know blog.com and Livejournal pretty sure we’re not.

Blog.com, that site just went to complete crap. I don’t know if any of you ever used it. But half the time or most of the time, it never opened. It wasn’t being crawled, it was just kind of ignored. It was kind of a waste for that, in my opinion, it is a great domain name and it would have made for a really good web 2.0 system, but I think it was probably mismanaged and just didn’t have the resources for what ended up happening to it, which was a lot of people, you know, sadly, just putting junk on it with tools.

The test one was linked to a Livejournal. Test two was a spun version of the content on blog.com. And then three was Tumblr, the exact copy.

Test one, the target page moved from number three to number two. That’s it. I guess, if you don’t have anything else, and you just want to get one more boost, then probably a Livejournal would be okay. In the scope of power, that’s weak, though. If you think about how these tests are built in a single variable, not a whole lot of other competing factors going on with the content or with the page, other pages don’t have backlinks and all that madness, and you have one Livejournal that moves it from three to two. That kind of indicates how that power is.

Could you boost that Live journal up? It would be interesting to see if we can pull that off.

Test two was the blog.com. That was the spun version of the article and it just stayed in number three. It didn’t move and go up, it didn’t go down. It just stayed at number three, which is more indicative of Google just don’t care. Or more than likely with the problems that were going on with that website back in all that time. And I haven’t checked lately, but I’m pretty sure it’s still the same. Google just stopped crawling them and they never saw the link in the first place. So which is why there was no bounce either way.

And then finally, it was the full content and that one, just the ranking of the link moving one and two bounced around but the actual test page didn’t move either. And that’s from Tumblr. I think there are some things to be said about Tumblr – is mainly that platform you can do a lot of stuff like meta refresh redirects, you can do do follow backlinks, you can create them in mass, and Tumblr at that time showed zero interest in stopping that. They just didn’t care, they just wanted people using their stuff. Today it might be a little bit different. So I think that we should probably retest Tumblr and its benefits for link building and promotion.

Certainly for promotion, if your audiences are there and using it and mainly if you’re in the photographer, the creative market, you probably got some uses on Tumblr, outside of like Instagram or whatever. So Tumblr might be good for you. Even Deviant Art at this time would be good for the artistic crowd, although those are falling out of favor with a lot of people and frankly, I think that has a lot to do more so with their marketing and their awareness. People just not always aware of these sites are still out there, but we’ll test that out again.

I’ll test out Livejournal and I’ll test out Tumblr again, blog.com not even wasting my time unless someone bought it and made it better but that’s those three sites.

I hope you can add those to your arsenal. Check it out and see if it’s worth your time. Personally I would just recommend waiting till the retests are done and published on SIA. Then, you can see if you want to waste your time there but in the meantime, go to Tumblr and see if your market is there. If your markets there, you might want to just create an account and secure your username for now.

Subdomain Vs. Subdirectory: Why The Subdirectory Wins at SEO
Can You Build Links to a Page’s WP-Admin to Boost Rankings?
Company
Resources
Products
SIA Login!
Learn