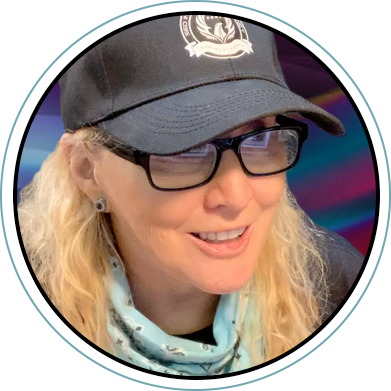 So who am I anyway? <— Click to see my Wikipedia Page 😉

And yes Dori “Friend” is my real name. lol.

I’m the founder of SEONitro, the SEO Intelligence Agency, (with Kyle Roof and now with Clint Butler)  SEORockstars and PageOneEngine  among other things. (See more at the bottom of this page.)

I have been online since 1993 and in SEO since 2001. I’ve been building link networks since 2003. I started to talk about PBNs (although they weren’t called that then) and controlling your links way back in 2007. Here is a picture of me on stage at that conference. 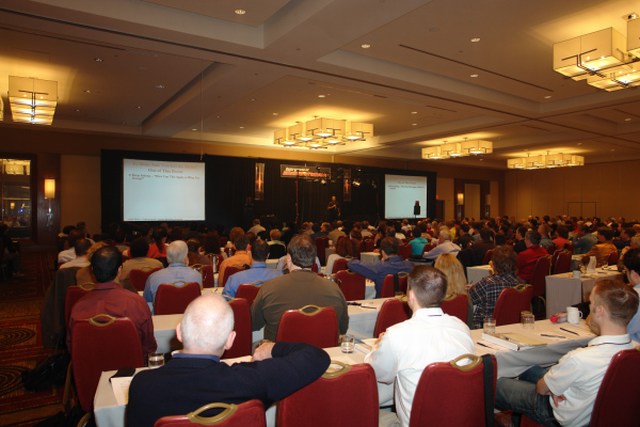 And then a screen shot of a couple of my slides from that presentation in 2007 about controlling your links. 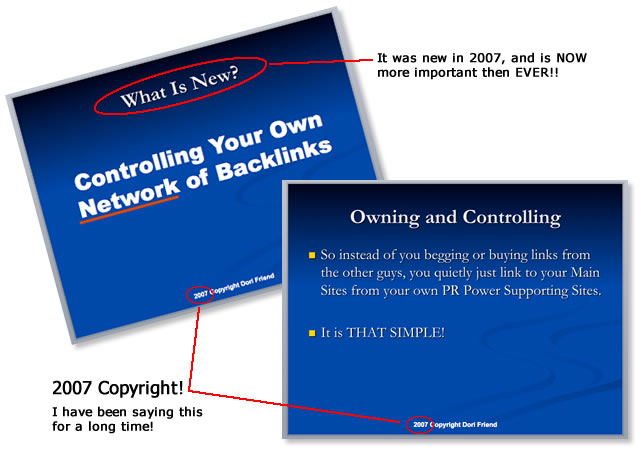 Back then we called them “mininets” and here is an incredibly simplified drawing of what we used to do back in the day. 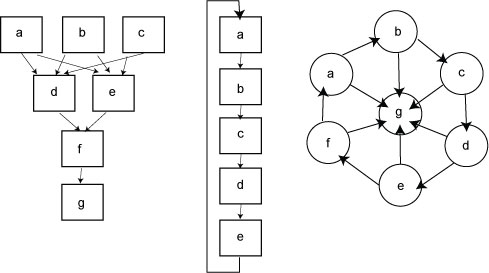 I created one of the first mass page builders that would create mininets automatically. We called it Traffic King Pro and sold it for $10,000 an install back in 2005.

I’ve been teaching other SEO’ers how to build link networks (aka PBNs) ever since so I guess you can say this IS my area of expertise. I have spoken at all different kinds of conferences and have my own yearly conference. My conference is in its 10th year!

I won best speaker at Jeff Johnson’s Traffic Blue Print Workshop talking about this stuff. I used to charge $1,000 an hour for consulting when I did it. (I don’t anymore, so please don’t ask.)

I have spoken at countless events. The largest audience being 6,000 people! =:0 Here is the video for that.

Before that, I developed software for Apple Computer. So yes, I am a Geek! Not to brag or anything, lol, if you owned a MAC prior to 2000 then you have seen my work.

Here’s one that you see in Photoshop and in all kinds of different software. This interface was done for Apple in 1995. 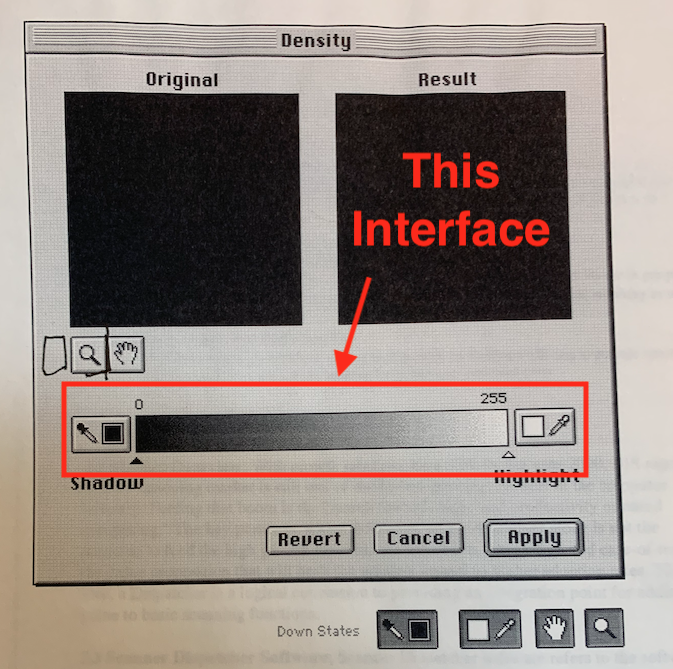 This is an old picture of a print out I gave Apple. That is how we showed our work back int the day! Oh, and I was the one who made all those little icons 3D for the first time for Apple to start to use on all their software in the 90s.

Hell, ok, turn on any smart phone and check out ANY area that is transparent. That was my idea! They wanted to make it solid black and I said NO WAY, this is how you should do it! They agreed and went on to get a patent on it. 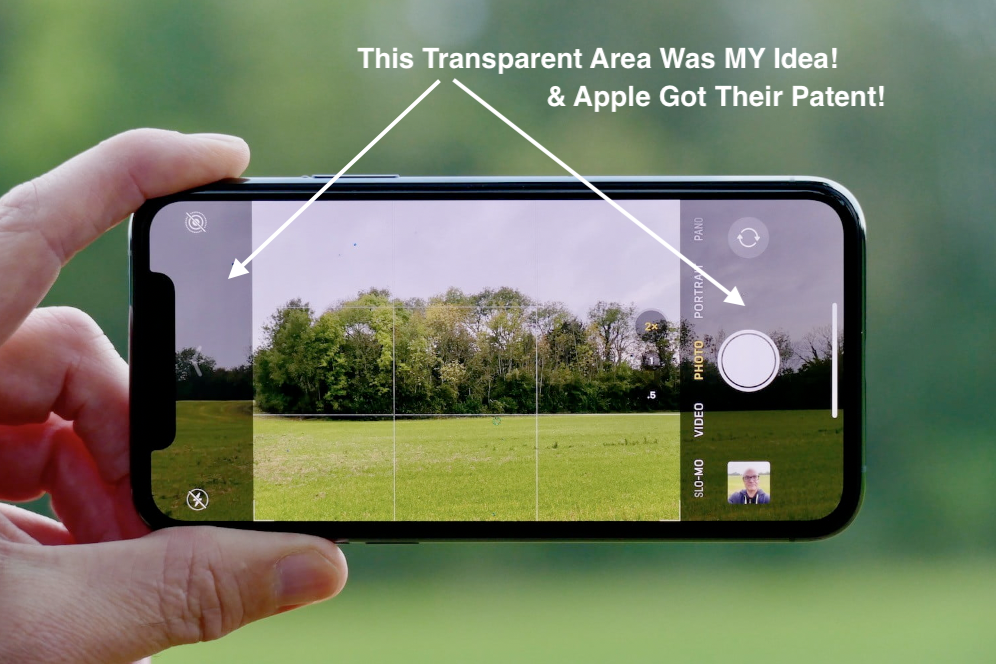 In fact, I was on the team at Apple that created the FIRST graphical digital interface for cameras (that are now on phones)! That was in 1996 and there is STILL a patent on it! And no, I don’t get any $$ for it! I was just a young hired gun at the time. But it really woke me up to the simple kinds of stuff you can get patents on! I was even summoned to court to testify that I had created it (among other things) when I did. HTC and other phone companies have to pay Apple licensing fees and they were trying to get out of it. =:0 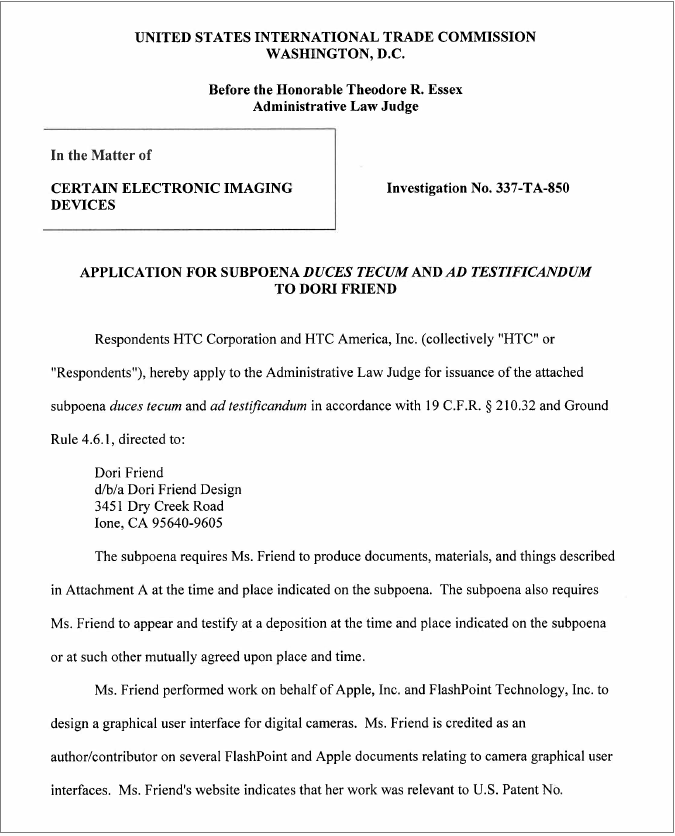 Below is my video I created showing all the work I did before I found the internet. It is a FAST video so you can’t blink. 😉

This is my demo reel showing the products that I worked on with Apple and other tech companies in the valley. Many patents were achieved. 🙂

Hell, I still see my icons and interfaces show up from time to time on new stuff. And before all THAT, I won an “Employee of the Year” award at the City and County of San Francisco, from the Mayor for INNOVATION!

I created some of the most powerful network building software on the planet with Jeff Johnson back in 2005. I am responsible for the over twenty thousand blogs in SEONitro, SEOLinkVine Elite, BackLinkBuddy and SEOLinkMonster.

I am lucky enough to hang out with some of the most well know marketers on the Internet and some of them I can call very good friends and have on speed dial. 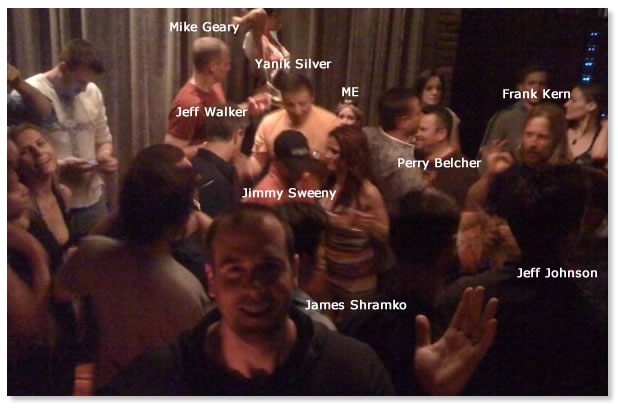 But if you are NEW to the Industry, you may not recognize any of those Big Shots!

I am even lucky enough to go to places and hang out with the rich and famous! (Can’t call any of these guys friends though lol but who cares I will be able to show these pics off until I am living in a nursing home and smiling with no teeth as I wheel myself back into bed at 3pm!) lol

And just in case you don’t know, the line up is me and Whoopie Goldberg, Steven Tyler with me and my best friend Debbie, Smokey Robinson and Adam Lambert!

I then clawed my way into becoming a Maverick1000 member. (I can’t believe they accepted me!) And now get to hang out with a ton of very savoy, rich business owners! Even though we look a bit crazy below, the group has strict restrictions on applicants so I feel honored to be a part of them! (Can you pick me out in the pic?)

I also host an incredibly successful SEO Conference every year (128 people in attendance) where there is NO pitching. It is just incredible content from some of the smartest underground SEO’s on the planet. (Again, all my friends whom I have on speed Skype!) 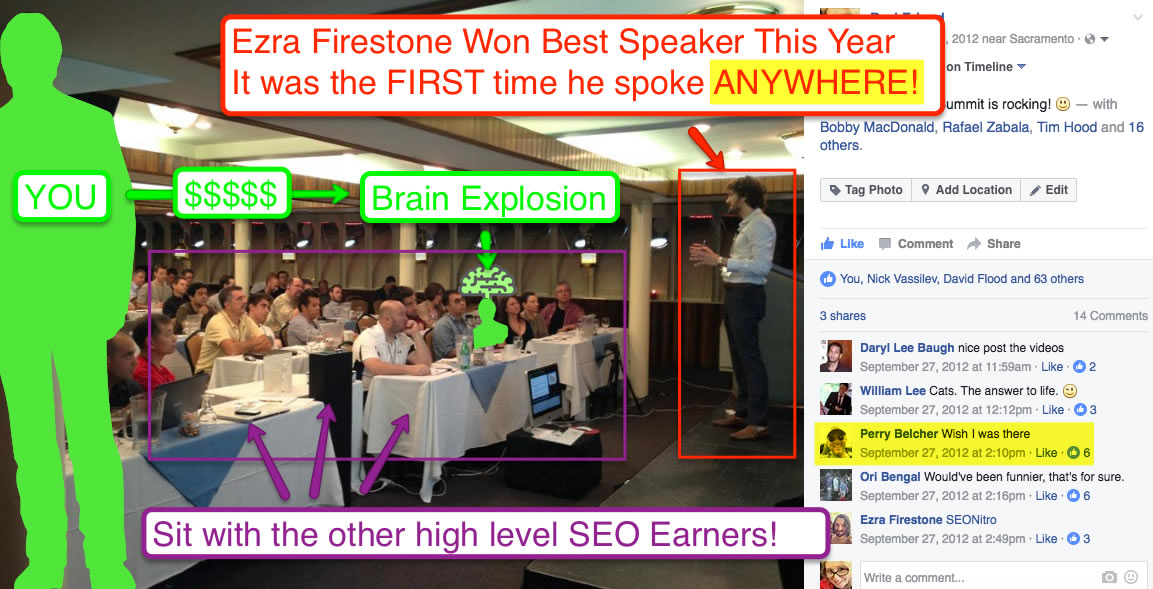 And not that it matters other then it was just plain fun, I had everyone at my house for the ending party.

But what I’m trying to get through to you is that I live and breathe SEO. I’m the real deal. I’m not a newbie just trying to bull-whack you or someone who “just” started doing this SEO or Internet Marketing.

If you know me, then you know I have beeeeeen around, and hopefully, we’ve had a beer or coffee together. If you don’t know me, then I can’t wait to meet you!

And, trying to be as humble as I can, (well, ok, the pics of the famous peeps was a little obnoxious, but I just had to! LOL) but I am probably the MOST knowledgeable person there is when it comes to building blog and link networks. I have been building them long before they became the business of the week and long before most of the “new” blog network guru’s put up their first site! Really, I have NOT met anyone who knows more about it then I do.

Check out some of my testimonials here!

…not enough, then go here! lol

But I will admit that Clint Butler is the SEO King. He’s got all the on-page SEO chops going on and well, he does DO a weekly SEO News show, so talk about well informed!!

At home… well at the ranch actually, (where I have lived with my wife Meredith since moving out of San Francisco in 2002,) I mostly lay in bed with my computer on my lap (because, who ever gets enough work done!) but if I wanted to go outside, (and sometimes I do 😉 I have to say, there’s nothing quite like it.

We live out in the middle of nowhere’ville California, it’s beautifully peaceful. And, I feel incredibly fortunate to call it home.

Looking out from the gazebo watching three of our horses grazing. 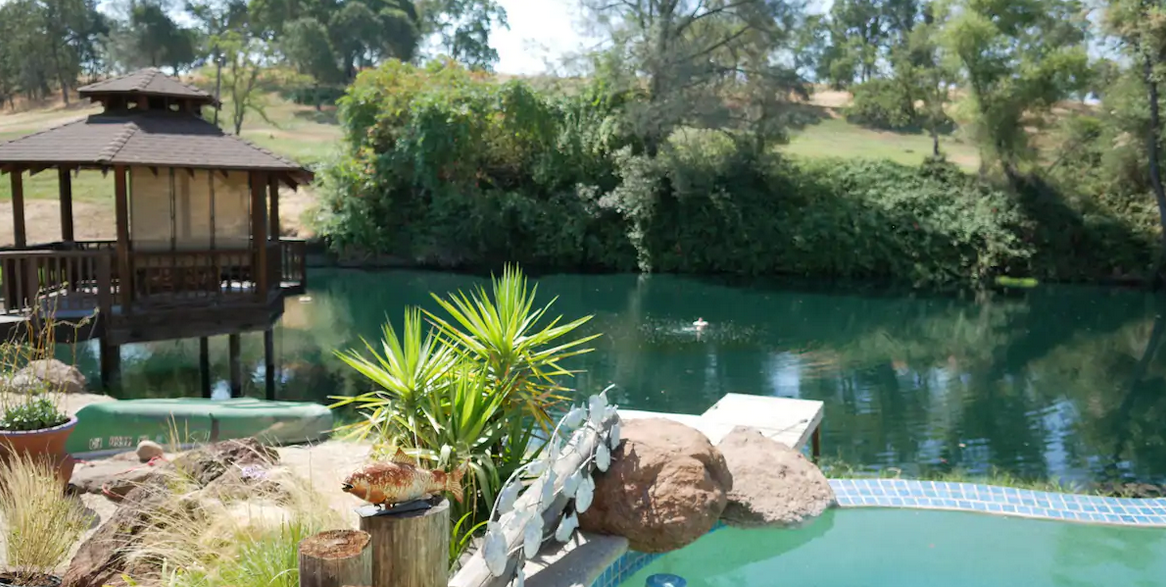 Looking out from the pool onto the pond & gazebo.

This is part of the pond and the picture was taken right after it rained. I love it when it is green out here which is only in the winter.

Meredith looking out of the gazebo.

So, along with my wife Meredith, we have 3 dogs, 4 horses, 1 mule, 1 pony, 7 barn cats and 16 GOATS! And I hear chickens are on the way! (We’ve had them before and have a chicken coop already, so it’s just a matter of making the time to raise chicks into hens.)

But… OMG the goats!

First though, here is a picture of Meredith with one of our horses… 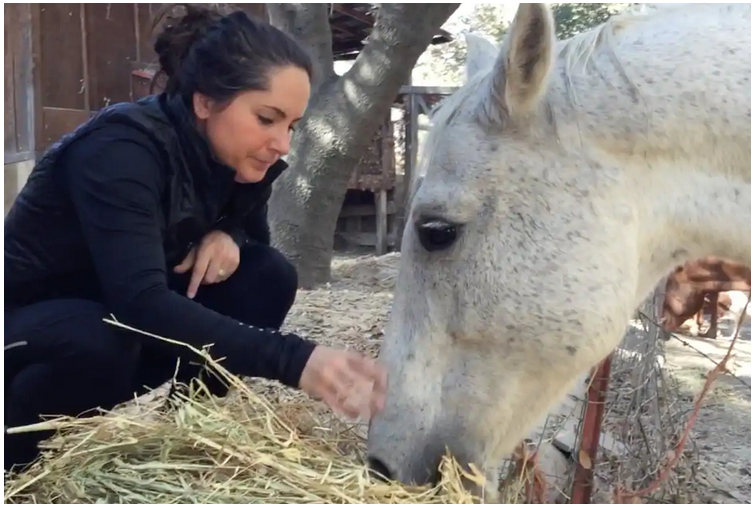 Meredith feeding Kailua the horse (who was totally black when he was born BTW.)

…but she could really care less about the horses, she LOVES her GOATS! 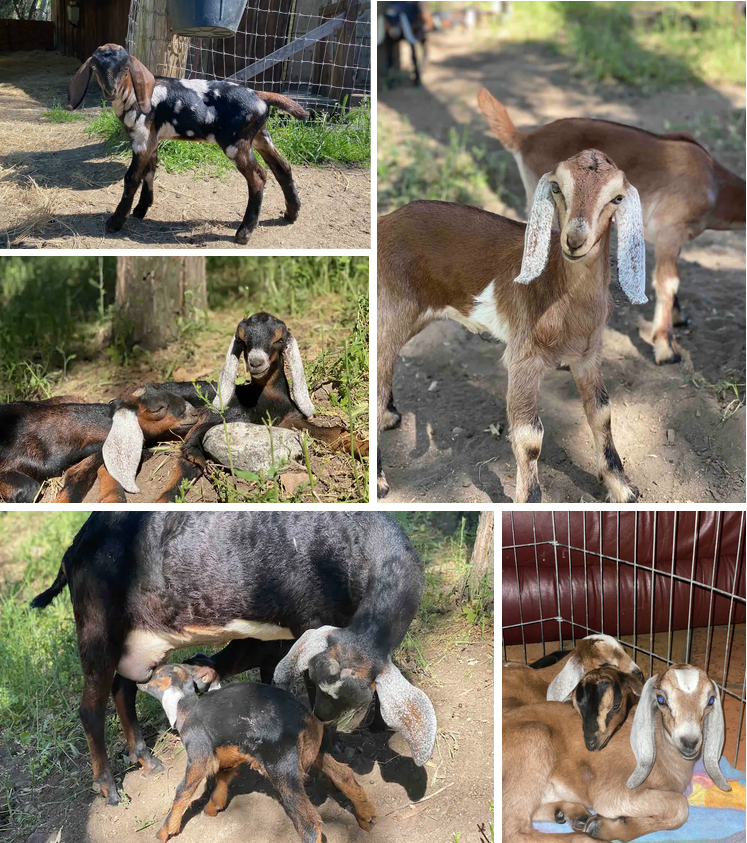 These are all baby goats except for the one momma just above. The ones that look like there are in the house, ARE, they were bottle feed goats so they lived inside with us for months!

And I will admit, the goats are really pretty cool. We have Nubians, they are the ones with the floppy ears and are very friendly! They each have their own personalities as well. Meredith will just go out and sit with them, and they with her.

And of course, we BOTH love our dogs! 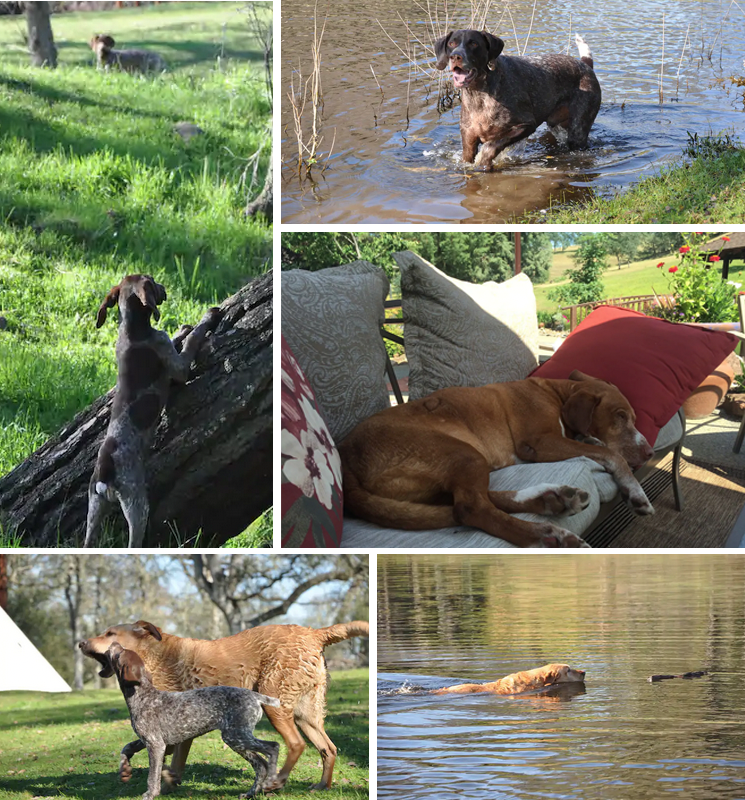 So when I do go outside to enjoy the quiet, fresh air, I usually find a spot to sit, think, and yes… bring my laptop! lol 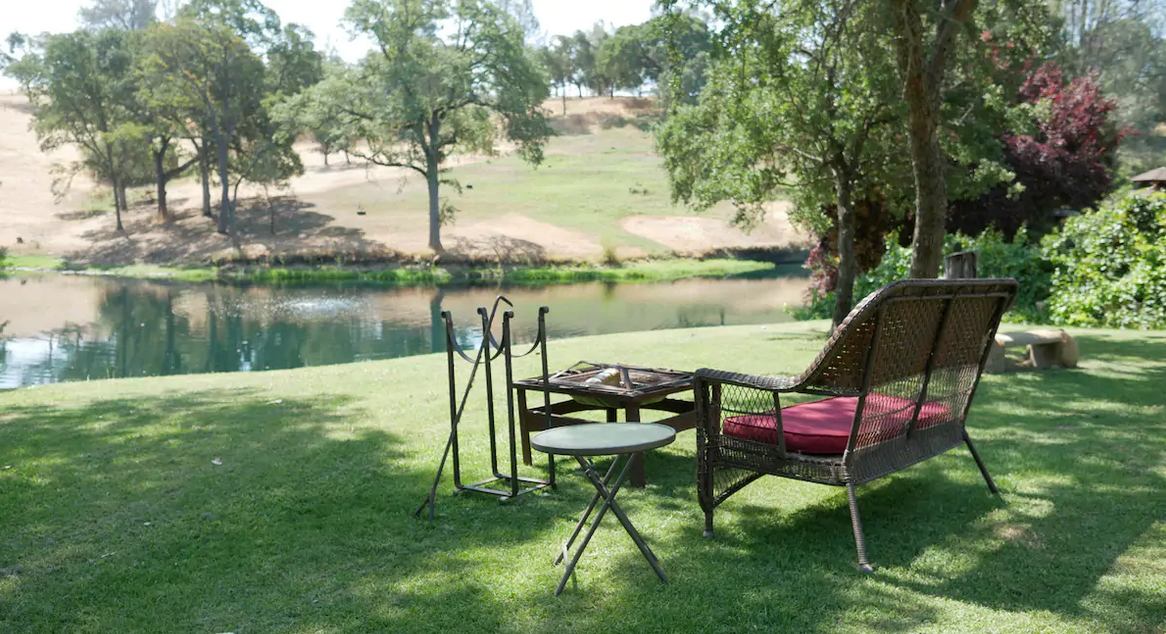 And also, because I believe in multiple streams of income we created a couple of Airbnb units on the property (with two more on the way.) You can click on the images below and check them out and maybe even come visit me. 🙂

I may post some more stuff I’ve done over the years, but I think this is enough about me for now.

But just in case you’re starved for more testimonials, here are a couple more to finish out the page. 😉 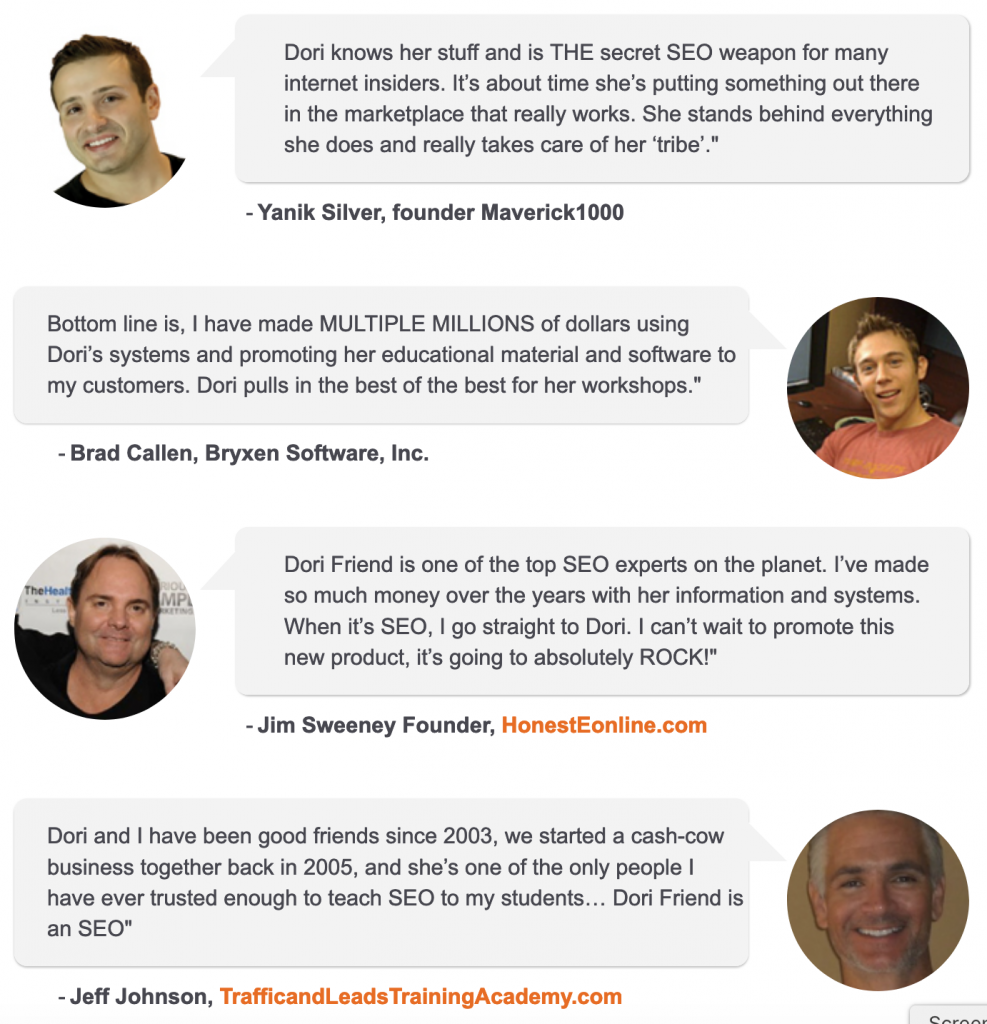 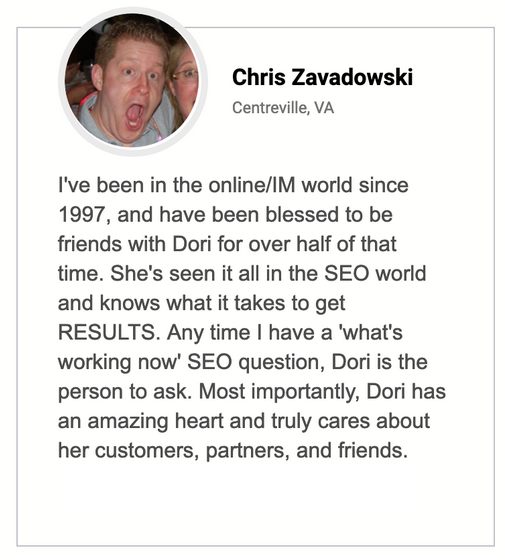