Patents We Have Received & Are Incredibly Proud Of

It’s not easy to get an SEO patent, and it isn’t cheap even just to try, but we knew we had something original, so we put it to the test and after a very long (years & years plus one addendum later) wait, we were finally informed that it was granted!! 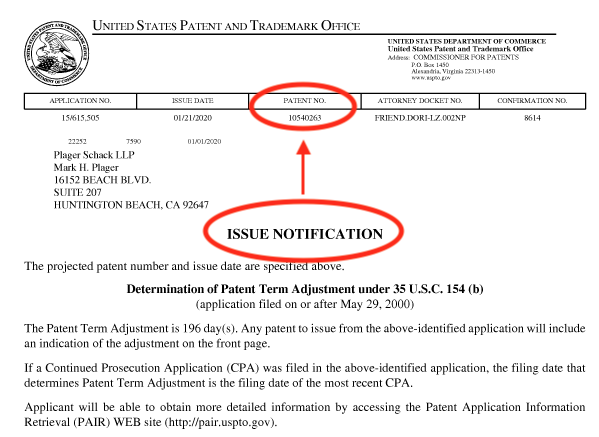 U.S. Patent No. 10,540,263 covers single/multiple variable testing and scoring. You can click here to download and read over the entire patent, but here is the short hand of it.

To create a single/multiple variable test it is pretty much the same as above but now we are adding another page with another variable to it to see which variable is stronger. We can then score and track each positive (and negative) variables strength against each other. 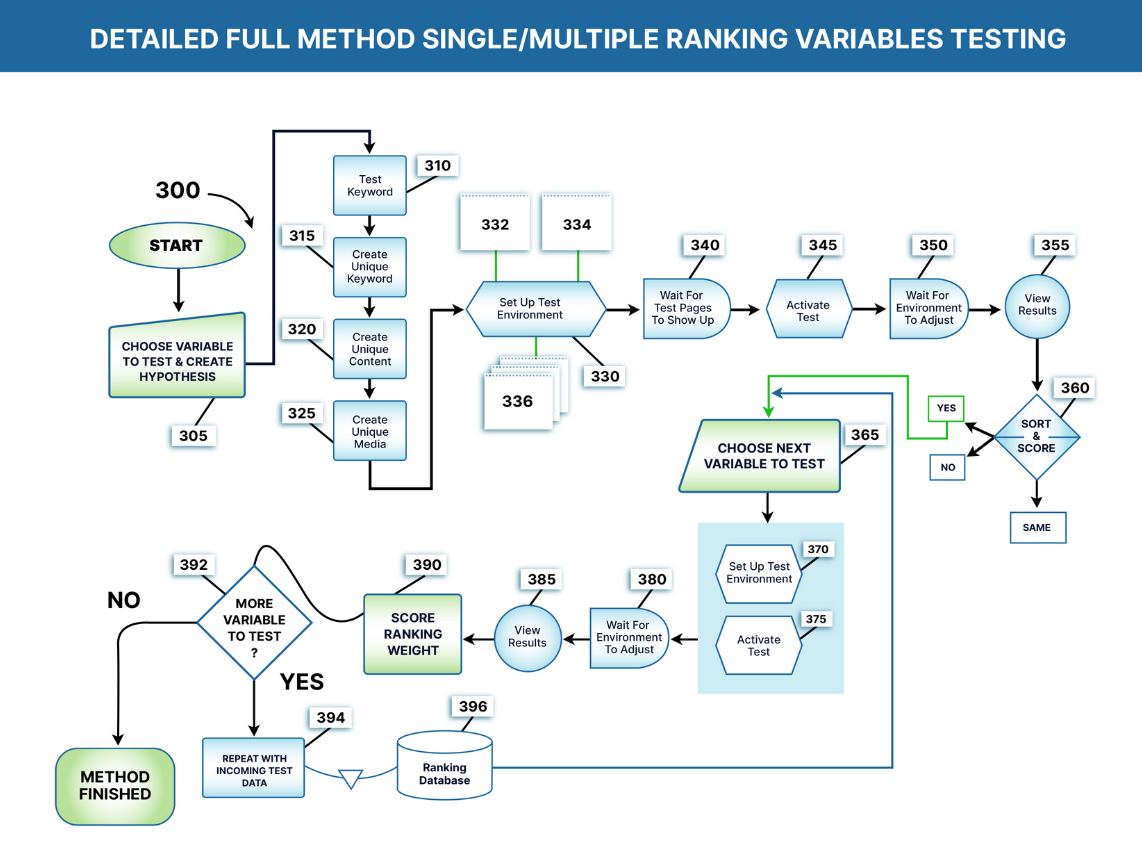 Below in FIGs 1-4 is how it drawn out by a professional patent illustrator. The numbers are associated with the written patent. The entire process of creating each bit of the technology in attorney terms is a long and enormously painful process. lol 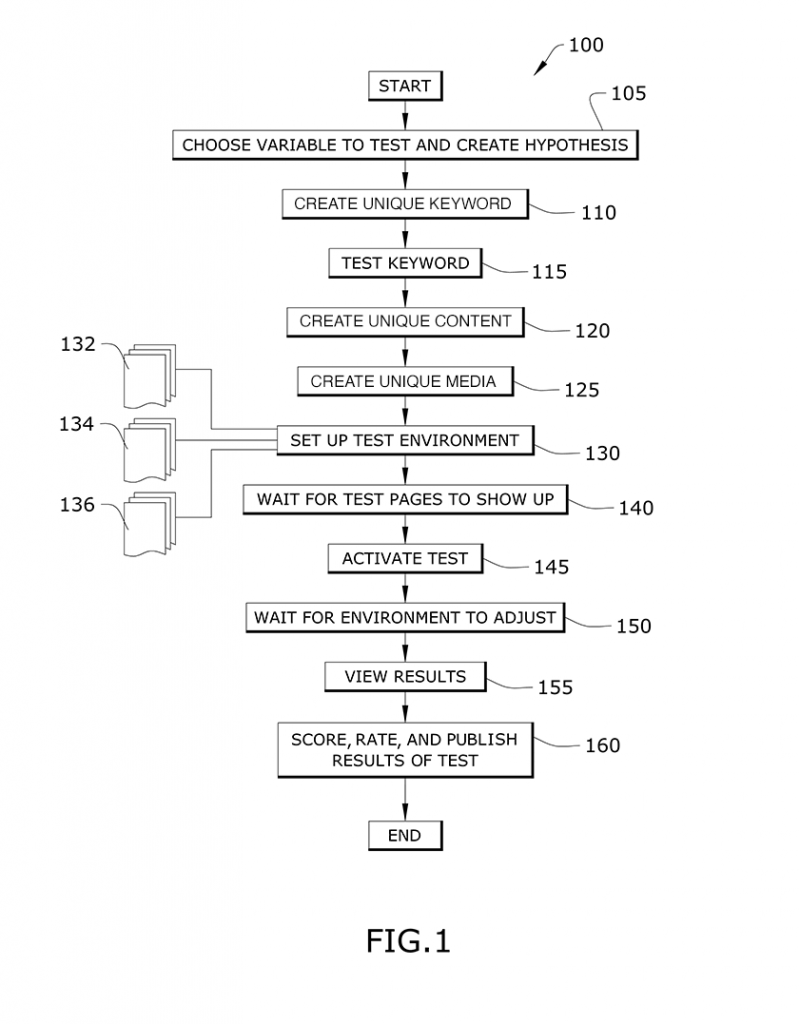 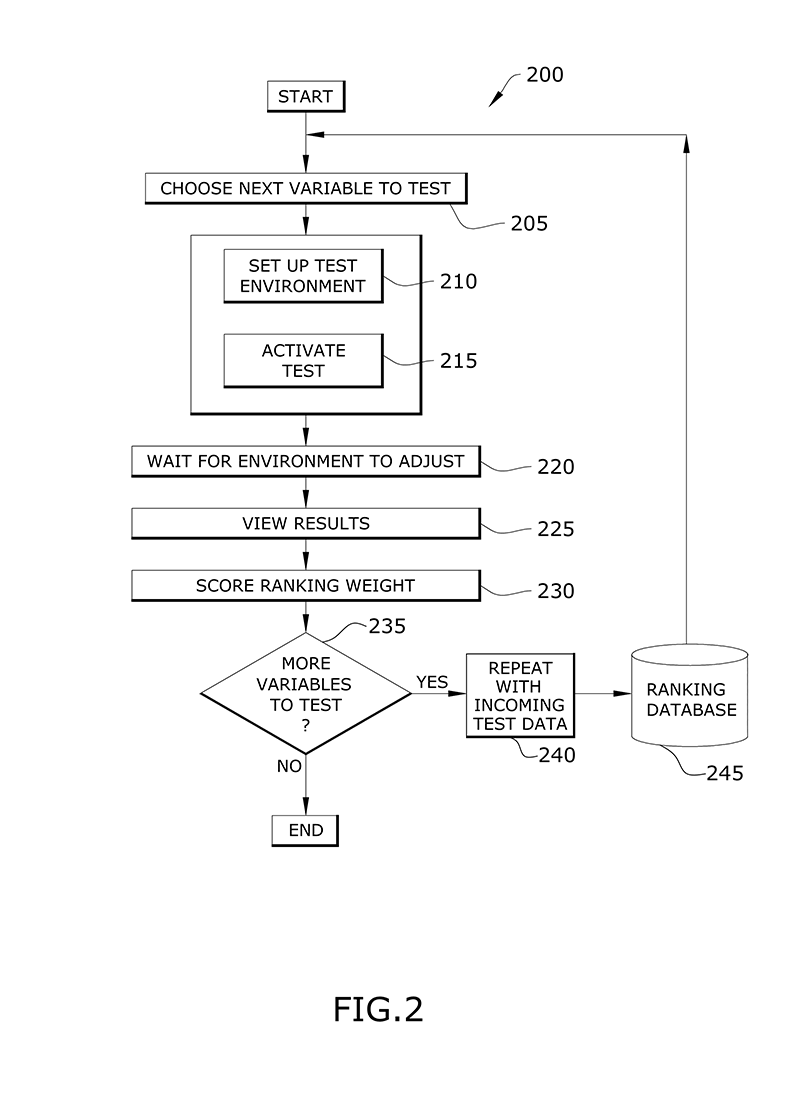 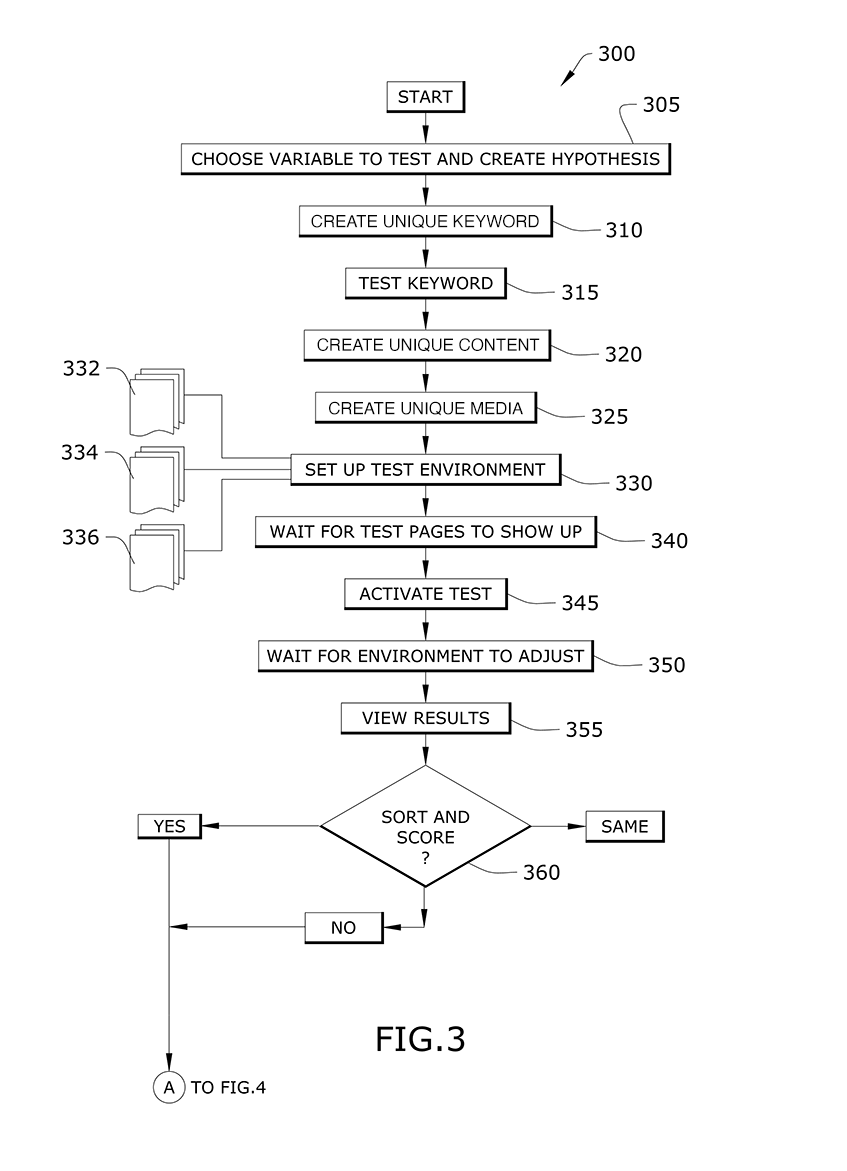 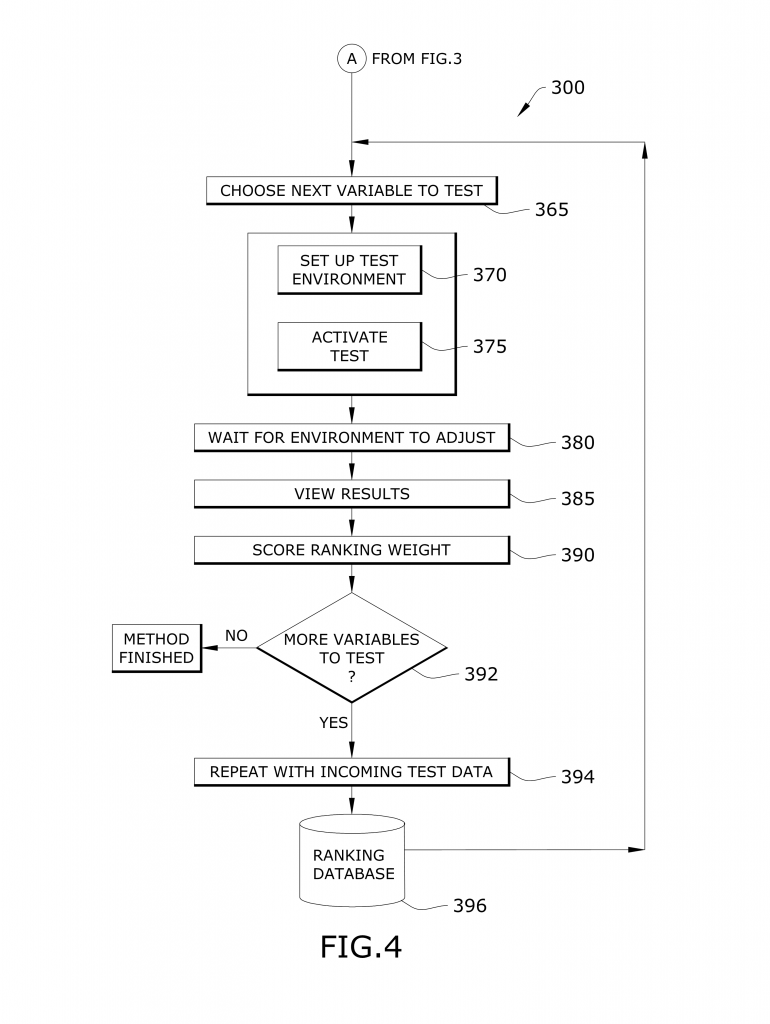 This what the first patent I received outside of my work with Apple and other Tech Companies back in the day and is still being used at SEONitro.com.

This idea came about after the 2012 Google crackdown on link selling. If you were around, you know about it and felt the pain we all went through. If you weren’t, count yourself lucky. It was hard times for SEO as link building was considered an SEO “best practice” and even most “white hats” of the day indulged.

What happened was in attempts to push more businesses into the Google Adwords platform they came after SEOs in a big way. Not only for linking, but for just “being” active, so it seemed.

First we had Panda which was mostly focused on on-page aspects, and THEN Penguin which mainly focused on link building. It was actually Panda 3.7 that links were first attacked, there was a small paragraph at the bottom of Google’s announcment about link building that they were turning OFF. This is a screenshot I took of it at the time for a presentation I was doing at the 2012 SEORockstars.

Link evaluation. We often use characteristics of links to help us figure out the topic of a linked page. We have changed the way in which we evaluate links; in particular, we are turning off a method of link analysis that we used for several years. We often re-architect or turn off parts of our scoring in order to keep our system maintainable, clean and understandable.

Sites that had an enormous amount of exact match anchor links (i.e. the same keyword in their links over and over again, like if I wanted to rank for “olive oil” and had used only that keyword as my anchor text in the links I built.) Now in hind-sight, we recognized this, but for a long time, the industry at large didn’t know what was causing the drop.

I had noticed some signs of this in late 2011 and had built a rudimentary software program that analyzed a sites backlink anchor profile. This was way before ahrefs or Majestic had started to include these metrics. But a the time, my theory of what too many exact match anchors was just that, a theory based on my observation of sites with almost 100% exact match anchors.

I had no idea that Google was going to alter their algorithm to the extent they did and cause most SEO’ed sites to drop like bricks.

At the time, there was no way of changing your links unless you controlled them. And even at that, it was a long painstaking process. It was at this time, I thought there had to be a better way to control this so Google could never again change it’s anchor algorithm and leave me (or my customers) to Google’s whims and destruction.

So I had an idea.

U.S. Patent No. 9483563 – covers the ability to change complete linking profiles. (You can click here to download the entire patent description here.) This includes not only changing anchor text, but the ability to delete or change any and all of a link or the entire link profile to whatever is working at the time.

The attorney of course gave it a long attorney(ised) name, calling it:

Below is my original drawing to explain it to him and other SEOs. 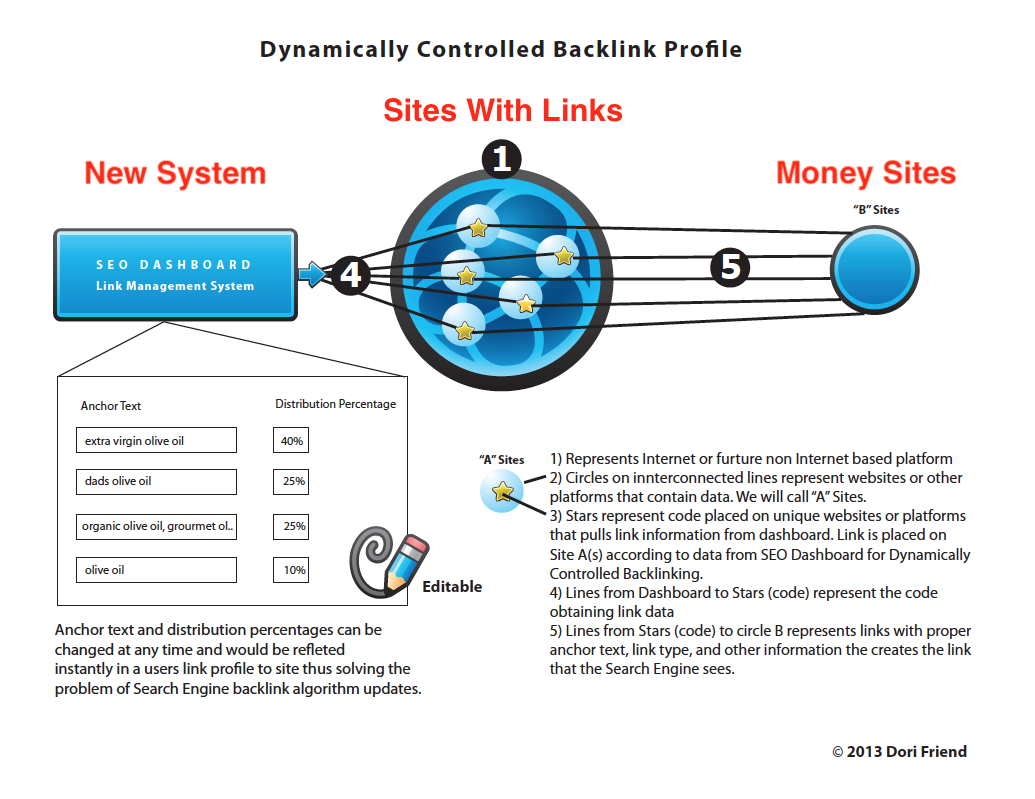 The attorney took that and then had his professional patent illustrators create it for lawyer speak. 😉 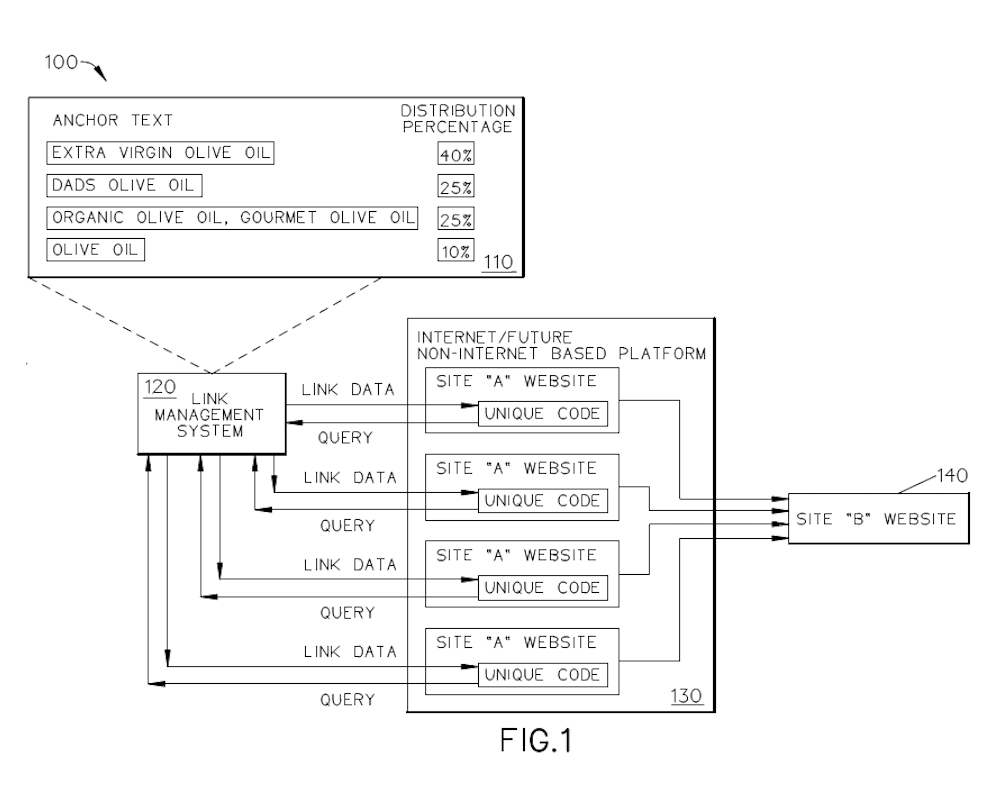 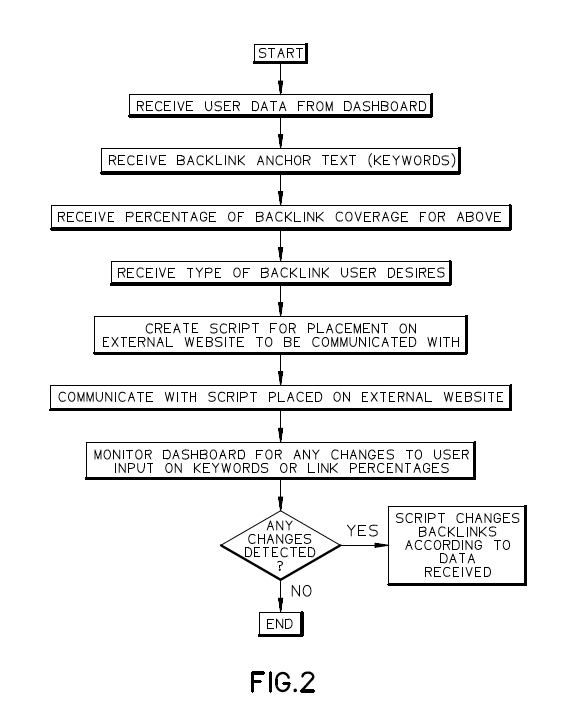 We started working on the program immediately and I am my customers have been using it successfully ever since. And since it’s about Dynamically Controlling your Links, we call them DCL Campaigns.

So using this technology makes it really easy to change any quality of a single link to your entire link profile. 🙂
Company
Resources
Products
SIA Login!
Learn