What is the right anchor text percentage?
SIA Team
September 21, 2021 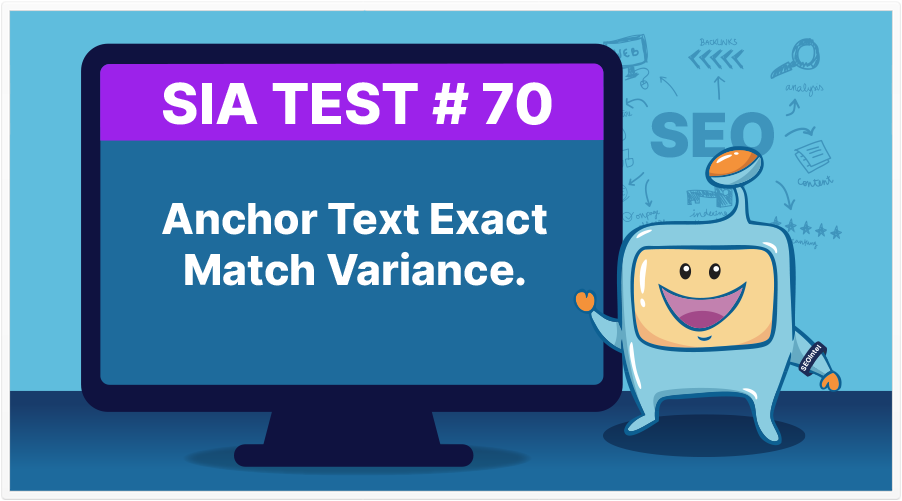 For this test, we wanted to see what would happen if we had pages that received different percentages of anchor text to naked URLs pitted against each other. Which variation would rank at the top?

Five identical pages were created and submitted to Google. Once they were published, links were sent to all 5 pages. We varied the anchor text to naked URLs going into the page with the following 5 ratios:

To vary the anchor text, we used the Link Ratio Campaign tool in the SIA dashboard. This tool was created and patented by our very own, Dori Friend. This tool allows you to choose the anchor text percentage that you would like used across posts in a network. The anchor text is switched up via a shortcode.

Using the network also available in the SIA dashboard, we set up an equal number of links to go to each post.

The page receiving 50% anchor text and 50% naked URLs is the winner.

This test doesn’t declare that 50-50 is the exact ratio, but it underscores the point of diversity. We assumed that the page receiving 100% anchor text would have been the winner in a test environment, but it didn’t happen. It’s also very interesting to note that the two pages receiving the highest percentage of anchor text, 100% and 75%, were dropped from the rankings.

In this video, Clint talks about this test and his insights on the use of target keywords and url/brand links.

Alright, so this video is actually pretty interesting. This topic is pretty interesting to me. I’ve been talking about anchor text analysis for quite some time, I actually did a presentation on it before for SEO spring training and one of the people that pushed me off or got me going down this road is Michael Milas. He’s actually a part of the Web 20 Ranker Team now but back then, he was on his own. He was a pbn seller and he had this process to analyze your anchor text and put it into specific categories and then that’s how he made recommendations for which ones you should probably use when you’re buying his links. And I thought he was onto something. So I got delved deeper into that, I dug deeper into analysis, and I actually even went so far as to invest $15,000 to get a piece of software built for it.

Now, software actually turned out to be a big honkin failure because it just, it was louder of a project than we thought, and I couldn’t get the devs right, and it just didn’t work out. But the concept is there and it’s still very effective to this day.

And basically, what you want to do is go draw the links and the anchor text out for the top 10 competitors in your market and what you’re looking for here is – one, the type of anchor texts they got, brand, URL, brand plus keyword, exact match, etc, etc. And that’s broken down into like 15 categories, but you want to figure that out – the type and then figure out the amount and then the percentages. And if you look at that, the percentages of anchor text being used are probably going to have some closeness of range, right? There’s not going to necessarily be this, there may be an outlier, but for the most part, those 10 pages are going to have almost similar link profiles for the pages. We’re talking about the pages, not the domains.

And so you dig through that, analyze that, and you figure out what is the average of the exact match percentage, is what you what you’re looking for. And then that will tell you how much exact match anchor that you can build for that specific thing. Now this came from, at the time, there was a lot of talking heads and there was a lot of SEO trainers, etc., talking about you can’t have more than 1% exact match. And that came about after the Penguin update. Penguin was links, Panda was on page. So the Penguin update came out and the 1% anchor myth came to fruition across the industry.

We were actually wanting to test that and so, in this case, we’re using five identical test pages and we submitted all them to Google, got them indexed, and then we sent links to all five with variations of link anchors. So you have 100% exact match, 75% exact match 25 naked, 50- 50, 75 naked 25 exact match, and 100% naked. Conventional wisdom says that these two are probably your safest bet. But the testing results actually said that this is the one that went out.

Now what do we get out of this? First, we’re not telling you to go or I’m not telling you to go out and do 50% exact match anchors. I’m telling you to analyze the anchor text, and then you could probably use more exact match anchors than you thought you could. And so, do that and figure that out. Why did 50-50 work here, I talked about averages, and so these actually became outliers. So these are like the norms, right? And then these ended up being the, I’m using air quotes and you can’t see it, outliers for this test. So my guess is because these were so often wonky, compared to these other three pages, Google’s like – let’s see what the middle is, and then the middle happen to be this. So this would be the average, this would be the market, this was a standard keyword, if anyone wanted to compete with me, and we all had 50-50, I can go in there with 51 and probably win because I’m not too far out of the high, I’m not too far out of the low, and I’m not the outlier of this whole situation. So that’s why the analysis of anchor text is working. In particular for tier ones going to your money pages and your internal links, you can see this same process happening with your internal links, you’re going to build a silo, let’s say four pages, and you’re going to notice that there’s a point where Google no longer gives you any more credit. Your ranking just stops going up because your exact match in your silo, on your internal site, don’t work anymore.

And then you can drop these 50 percents in there, you can drop variations, etc. instead of the exact match, and go after other keywords without having to build in the silo pages, or without having to build specific silo pages. You know, just doing regular blog content, for example, and using those for internal links, all that stuff works. So check it out. Look, do some anchor text analysis.