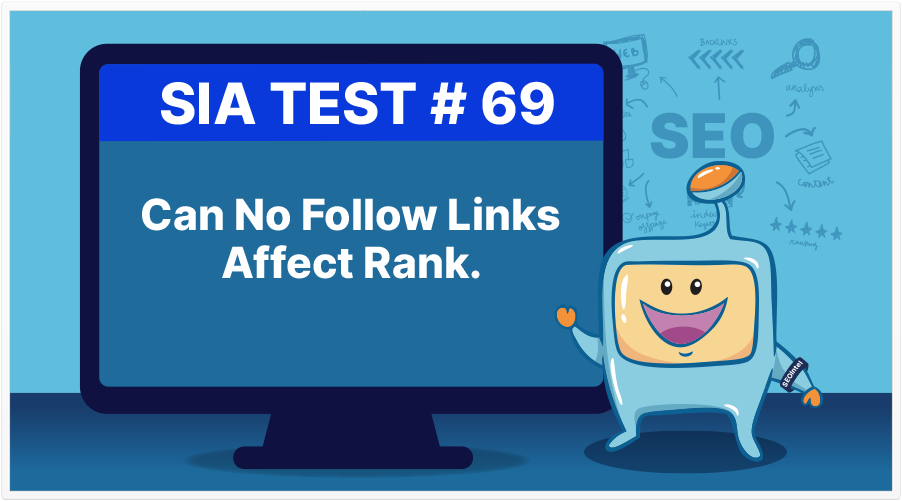 What effect, if any, do no-follow links have on rank is an age old question in SEO. If you do some research on the matter, the answers you will find usually say: “probably no direct effect on ranking but no-follow links make for a natural looking link portfolio.”

A lot of people also mention a MOZ article ‘The Hidden Power of No-follow Links’ that talks about getting traffic by building ‘awareness’ and ‘engagement.’ As with nearly everything, there is never the answer on no-follow links can do this or that because they tested it.

We decided to test it to see what the real deal is when it comes to nofollow links. Can they affect rank?

Two days after running the test, the test page disappeared from the results.

Five days after the test, the test page appeared in the 2nd position.

No-follow links moved the needle. An important thing to remember is that no-follow is really to protect the site that is posting the link. The no-follow tag tells search engines that the posting site doesn’t want to take credit for the outbound link.

From that point, search engines are free to do whatever they want with the links after they crawl them. As far as Google is concerned, they will count no-follow links as part of the algorithm.

In this video, Clint talks about this test and his insights on using nofollow links.

Test number 69 – Does A Page With A NoFollow Link Affect Rank?

Alright, so what we’re talking about here is an age old argument between SEOs and it’s one that continues to this day. And that’s – does a nofollow link improve rankings? Can you get nofollow links and increase your rankings?

The conventional standard argument is that nofollow links pass no juice. And the idea behind that is, frankly, because it’s from Google. If you have someone who buys a backlink on your website, and there’s nothing wrong with monetizing your website, Google monetizes their website with paid links and that’s through the Google AdWords program or Google ads.

So they don’t have technically anything wrong with you doing that as long as you set the nofollow link and what it’s saying is this website does not wish to be associated with that website. However, we’re going to give a link to it. So essentially, SEOs take that as this website will not send link juice to that website. There’s no association, we don’t want you to associate it, so please don’t associate it.

However, Google did update the REL relationship availability settings or whatever you want to word that, but they changed some of the rel stuff. So it was either, in the past there was nofollow or do follow. It was really your only two options, right? And then they created user generated content, which is UGC, and then they recreated sponsored. And the idea there is to say, in particular, sponsored – this person bought this link or this ad is sponsored and that ad links to this other website ergo – hey Google, this is a paid backlink. And what that does is, our testing has shown that what that does is there’s actually no link juice. Like you can build REL sponsored links all day long, and it won’t work. It won’t increase rankings. We’ve seen it.

UGC, we’ve actually seen that those are passing link juice, maybe not as much as a nofollow or a do follow, but they are passing juice. So let me not get too far off track. So you got those other things.

Anyone who’s done a link penalty recovery knows that that’s crap. Because Google and their manual review team will send you backlinks as part of their examples of links that are bad that are nofollow. So if the link is set to nofollow, and the manual review team is saying these links are bad ergo, you could probably assume that Google is using these to one extent or another inside of the algorithm.

Why tell people that they have to clean up links that are nofollow if they don’t pass link juice, if they don’t manipulate the ranking in some way, or they’re not used as a hint in some way.

Also, I have been able to rank or I’ve done a lot of launch jacking in my affiliate days and I was using YouTube links. YouTube (links) in the description are nofollow. So if that link is not passing juice, how am I ranking with one YouTube video and the link in that description, right? Especially launch jacking stuff, it’s pretty easy, right? So as long as you get in there in the right time, even better if you have a good website, launch jacking is actually a relatively easy win from an SEO perspective.

With this one, five identical test pages were created. The number three ranking test page actually got some backlinks –  five nofollow backlinks under the assumption that nofollow doesn’t pass juice, nofollow won’t help you rank, nofollow won’t move the needle. Well this page went all the way up to number one position. It ranked based off of the nofollow links.

So while the nofollow tag might be saying – hey, don’t associate my website with this website, but I am linking to it, but don’t associate it. Doesn’t necessarily translate to don’t count it as part of your signals for ranking. And that’s what nofollow links are doing. They are signals for ranking. They are hints, regardless of Google takes that wording of the documentation now, or not. Nofollow tags are still being used as hints, user generated content still being used as hints, sponsored being used to identify even more specifically, paid backlink opportunities, which is great for web publishers, by the way. And do follow which is always, essentially you just leave REL out and you have the do follow.