Can compressing your images lead to faster load speed, and therefore, an increase in rank?
SIA Team
August 6, 2021 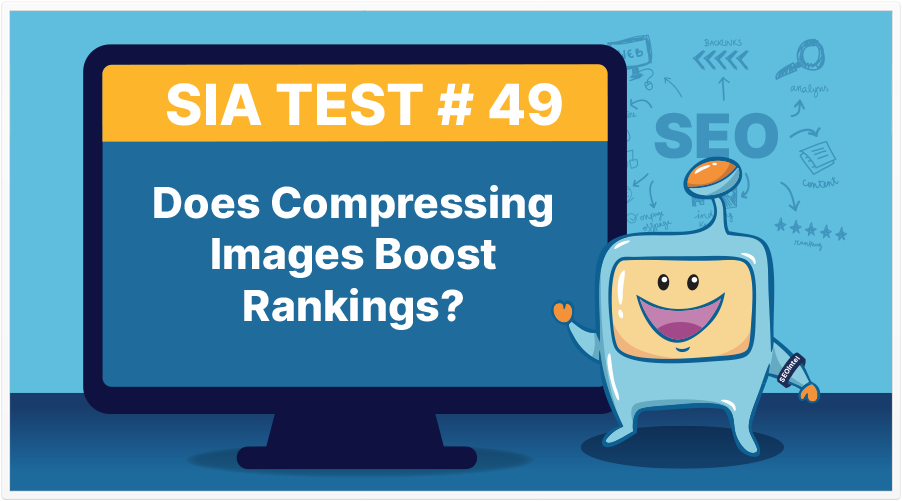 Google has confirmed that page speed is a ranking factor and compressing images is one of the things that you can do to speed up load time of pages that have images on them. Multiple SEO Gurus have said that compressing images will help you rank, primarily cause it helps a page to load faster. But will compressing images really help boost your pages’ rank?

Derek Booth of Sigma Web, one of our SIA testers, decided to take this question and test it to confirm if this SEO best practice for images can help boost rank.

The pages were dancing around and at the end of the test, one of the images that had the uncompressed file was at number 1 while the 2nd uncompressed file page dropped to the bottom. This shows that compressing images is not a ranking factor.

However, having uncompressed images on your webpage can take a longer page load time and a slow loading page is a user-experience factor. Even if it is not a direct ranking factor in and of itself, we still recommend compressing your images. As Derek puts it – “A slow page will harm engagement and therefore indicates a secondary ranking factor.”

In this video, Clint talks about this test and his insights on page speed and compressing images.

This is test number 49 – Does Compressing Images Boost Your Rankings

The title says one thing but the test is actually a different one. So hence, what happens if you don’t optimize your images.

And when I say optimize, it’s just using any old tool we use. I use Smooshpro. I have a WPMU premium membership, on some legacy pricing. So it’s all part of that and so my optimization is pretty good. The service was at Nitro pack, I think that does some image optimization. There’s plenty of image optimization services and software’s out there right now. And you can even save them optimized when you’re working in Photoshop and all that stuff, too. So you don’t necessarily have to use a service.

So that’s how this test was set up. It’s actually five pages and they just changed the images on the first and third page to unoptimized images and then they tested with the Google PageSpeed Insights tool and got new scores. What happened was the original ranking pages actually just kind of dropped down.

Well, actually, the first two pages returned to the original rankings. So the first page that was unoptimized, it was the first one that had the uncompressed image, it dropped in and went right back.

Then the original third place, which dropped to fifth, andthe original fourth into third and fourth, which doesn’t make any sense to me. It was like an added part of this write up. But essentially, the third image, this one here that was ranking third dropped down to the fifth place spot. So I lost you.

So, does optimizing your pages’ images matter?

For the results of the page, I would say no. Basically, what happened is number one stayed the same, it bounced a little bit, because you essentially changed the image, right, and you change the size of the image, ergo change the size of the page, which is an update to the page. Google bouncing it around to see where it was and said – yeah, this still needs to be number one, at the end of the day.

I would say compressing your images in and of themselves, in order to improve your PageSpeed score probably doesn’t matter all that much in regards to rankings. There could be a little bit in regards to optimizing your images for users, though, especially if they’re on mobile or for whatever reason, you get into this habit of uploading crazy massive sized images onto your websites for some reason. Because obviously, you’re not paying attention and your devs don’t care enough to look and say – hey, yo, this shouldn’t be this big. But aside from that, this test is kind of a bust. It’s a bust in regards to saying that if you optimize your images, you’re going to rank better. Not true.

We de-optimize them, and they rank the same or worse, in one case, so it’s kind of a wash, right?

Compressing images is just one part of page speed optimization. Check out our article on page speed for more tips on increasing your page speed.

What Are The Strongest Web 2.0 Properties for Linking?
Does the Use of SocialAdr Affect Rankings on Google?
Company
Resources
Products
SIA Login!
Learn