Myth Busting: Optimize Your Meta Titles For Clicks Rather Than Keywords 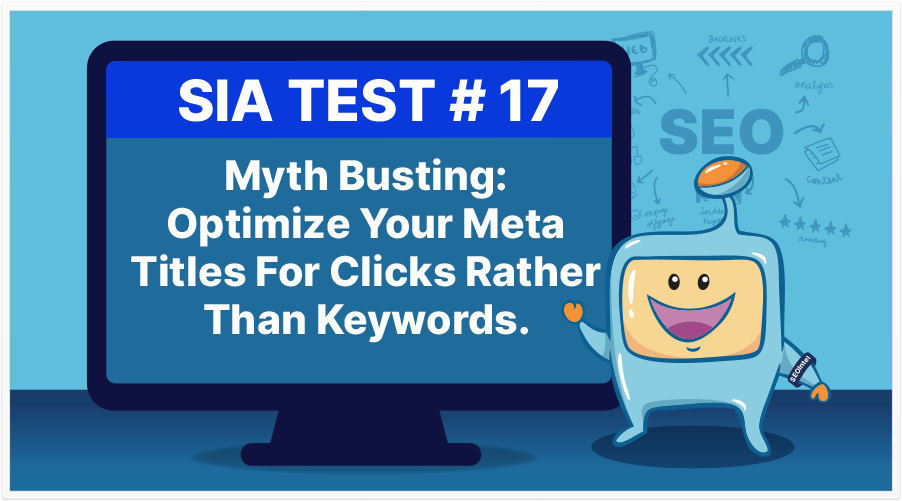 This myth that we are about to bust or confirm comes from Rand Fishkin on MOZ on his Whiteboard Friday last April 16, 2016. In his whiteboard, Rand makes the claim that you should not be optimizing your meta titles for a target keyword or target keywords and that instead, you should be optimizing it to get clicks.

For this test, two pages were set-up with the exact meta titles Rand uses in his example. The only difference from Rand’s meta titles is that the word “pipe” was substituted with a unique keyword. The searches that we are interested in replicating are searches for “pipes” and “wooden pipes”.

The meta titles that is optimized for keywords wins both the simulated searches of “pipes” and “wooden pipes”.

In this video, Clint talks about this test. He also talks about optimizing for both SEO and CTR, that you can do both, and how to do it.

I’ll just start off right from the beginning, applying 2021 knowledge to a 2016 test. If you need to have a keyword in your title tag, it’s just got to be in there.

The benefit of CTR is not outweighed by the benefit that you get by having your keyword in the title tag. And in most cases, you kind of want it up towards the front.

The idea is that the machine reads and it’s kind of sorting based on what it finds, right? So if you have a page or a title tag where the content is right up the front, the first word that the machine reads in relation to the title of the page is the keywords that you’re targeting and then you get the rest or the “fluff “, the supporting stuff.

I prefer to write my title tags so that we get a way to get the keyword up towards the front, but also so that it stands out from what everyone else is doing. And you want to do that for the people who scroll the search results and that they see over the same thing, same thing, same thing, boom – oh, look, that one’s interesting. So you’re playing with CTR, but you’re not ignoring the keyword being in the title tag.

And unfortunately, when people talk about the CTR and optimization and title tags, they think it has to be one or the other. And I say, why can’t it be both? One if I’m writing this nice piece of content, and it’s gonna rank and do well, why can’t I take a little bit of time to put together a title tag that has my keyword in it, but also again, stands out and is more clickable or more likely to attract the click than say, the competition around it.

With this test, we already debunk the whole idea that CTR is more important than title tags. And based off of this as a ranking factor, the keyword has to be in the title tag, it just has to be. We have this test and we have a few others, probably like 30, I want to say, tests where you’re messing around with different aspects of the title and seeing where the title tag is, in relation to HTML tags and the importance of it. We talked about that in the HTML tag test. You saw that where it kind of stacks up just like the big five.

I’m not the only SEO trainer or person or subject matter expert that will tell you how important a title tag is and having your keyword is. The fact of the matter is, you gotta figure this out in talking about implementing those keywords in there.

Now, CTR, how do you go about finding the best title tag for your term and consider CTR?

First off, there’s a couple things. One, you’re allowed to extend beyond the set characters inside of the title tag. So I think what is it, 60 is the number and that’s where all the tools are at and then it starts truncating, and Google will truncate off. But they are reading the rest of this.

I’m doing wooden pipes, let’s say my keyword is wooden pipes and that’s what I’m going to use and I want to talk about how to do CTR. So I could do something like this. And actually let me just show you a better look at it.

Let’s click on that. And I just want that word. So, we’re going to apply it right here. Custom wood tobacco pipes.

Wooden pipes, this one probably would have been one that I would have clicked on just looking at here, just because it did a little bit better. And maybe this one that handcrafted wooden pipe, so you can actually go – handcrafted custom wooden pipes. And that’s actually a decent link. So we can do a search for Google snippets. I usually have this tool saved.

We can see how much our town’s 52 words. Look, it’s going to show wooden pipes, my keywords up front, handcrafted custom wooden tobacco pipes, handcrafted wooden pipes, custom wood tobacco, pipes, custom wood pipes, wood tobacco pipes, tobacco pipes, all of those other variations are all right inside of there. And my title tag looks halfway decent compared to all these other ones. So if my page was here, and you’re scanning down, this is the title tag that says – hey, we know where we’re talking about with pipes, right? And you’re probably going to beat the CTR game. And if you get in top three, and you win the CTR game, more than likely the traffic’s there, Google’s going to reward you with page one rankings. That’s it. Page one, position one rankings, to be clear.

Alright, so that’s test number 17, optimizing meta titles. Remember, they’re important, but they’re not so unimportant that you leave your keywords out. Just takes a little bit of thinking, and I don’t even know this market and we wrote a really good title tag right off the bat.

We give Rand a chance and in the next test, we’ll see if there is a difference in CTR between the two different meta titles and if that CTR difference is significant enough to warrant harming your rankings in the first place by not adding the keyword in the meta title. Check out or test articles and read all about it.