Mythbusting: Will Adding .html To The End Of Your URLs Give A Boost In Rankings?

Is this a SEO hack worth applying on your page?
SIA Team
September 15, 2021 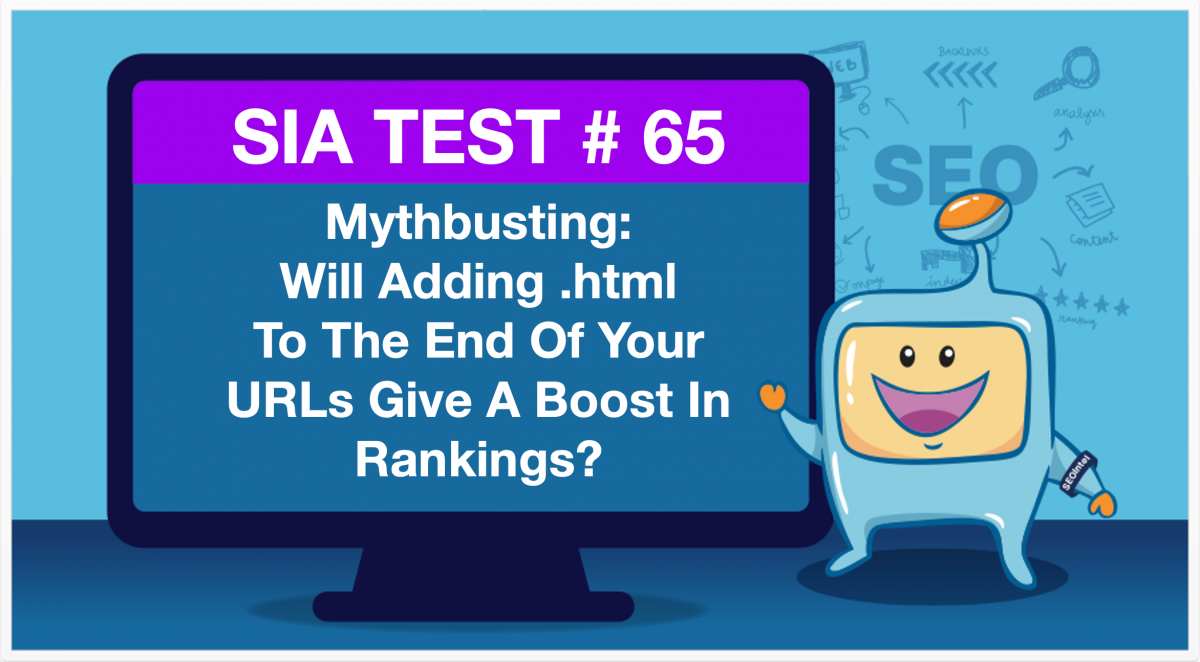 This is a myth that says search engines prefer when they know what type of URL they are rendering. The myth claims that if you add .html to the end of your target URL, you will get a boost in rankings. Is there some truth to this myth? Will it really provide a ranking boost?

Five identical pages were set up and indexed. All pages in this test were .html pages. The URL of the #3 ranking page was changed adding .html to the end of the page.

After a couple of weeks, the test page has dropped to the bottom. The .html is still not displaying nor have the SERPs updated the URL to its correct destination. The current URL is the old URL and returns a 404.

The drop in rankings is most likely due to the page returning a 404. It should be noted in the https test that the SERPs updated immediately, and the https page shot to #1, even when the SERPs were displaying the old URL.

In this case, it’s clearly not a priority for the search engine. I think we can safely say that adding .html to the end of your URLs is not a ranking factor. This myth is busted!

In this video, Clint discusses this test, his insights on testing, and how one should go about the application of data from tests.

Test number 65 – Adding .html To The End Of Your URLs Gives A Boost In Ranking

This test comes straight from the world of we make crap up. Let’s get into it.

Alright, honestly, I wish some of these tests had some source of where this information came from, who’s spreading this stuff out, so we can point at them and laugh, like, why would this even be a thing? Right?

Basically, what we’re looking at here are file extensions, right? So you do a Word document, it’s .docx, you do an excel spreadsheet, it’s .xlsx, text file, .txt. In the days of the burgeoning web pages before, things like WordPress, etc., you wrote your file in HTML, so .html, and when you save it, you have all this .html.

The thing here is that somebody actually, probably started somewhere, this is probably either a statement on social media might be my guess, or a blog post. But they publicly put their name behind the idea that if you have .html in your URLs, ergo, you’re going to rank higher because my guess is the idea is because you’re telling Google exactly what file type it is, that to me it’s just beyond common sense.

But, we got testing, we test things, and maybe my impression of the old idea is wrong, right? So it was tested. And we can say, emphatically, that it’s not a ranking factor. Adding or not having .html will not improve or reduce your chances of ranking on search engines. It just doesn’t matter, you can have it there or you don’t, Google does not care. Google is going to the page, identify that the code is HTML and say – hey, it’s a web page. And then there you go.

The same would happen if you’re doing a PDF, because what happens with a PDF, you upload a PDF, it is essentially translated. I don’t have a better way to do that, but it’s actually converted from PDF to HTML and that’s why Google can read PDFs because it’s being converted into HTML. It doesn’t necessarily have to do anything with the fact that, and that ,PDF extension, when you see those in the search results or the URLs for those, Google goes to, it sees a PDF, converts it to HTML, reads it, understands it, publishes it, and ranks it. And that’s essentially what they’re doing with web pages across the board.

HTML is the base behind WordPress, it’s WordPress and PHP to the drive that, there’s JavaScript, etc. And those all get turned into something inside of the DOM, and the DOM is displayed in HTML format. So, having HTML and not having it is not going to hurt or help you rank.

Regardless of how many tests we do, not every website will react the same way to a feature, function, or whatever that we say is a ranking factor. You have to test it on your own websites, as well. And that’s a step that most people miss out on. They go to testing groups, they learn about testing, they learn about the things that you’re learning from testing, and then they failed to implement it, or they don’t bother testing it on their websites, and then they get pissed off because they didn’t rank or it didn’t work, or it wasn’t as effective. So ergo, that testing group, testing person, testing methodology must not work. It’s because I didn’t see that same result.

Disclaimer, Google handles every website and every web page different than it would compared to everyone else. They find the differences. That’s their purpose, to find the differences between websites. And sometimes, rules apply to you that don’t apply to others. And sometimes, rules apply to keywords that don’t apply to others. And you have to know that and you have to understand that, and when you hear something like adding HTML into URLs gives a ranking boost. Take that with a grain of salt that it is, that it deserves, and then go test it and see what happens. And then test it on your website and see what happens.

And that’s how you decide and that’s how you use testing and testing groups, and how you leverage that stuff. It’s not to find the latest and greatest trick. It’s not defined as the latest and greatest ranking method. It’s to find what works inside of the search engines and what works consistently, and how do you combine those things together consistently, to do it over and over again. So that regardless of the algorithm update, regardless of the date time, whether etc., your SEO is essentially algorithm proofed because you’re looking at things, not only in an individual, tactical way, but you’re looking at things in a strategic way, as well. That is what you get out of SIA and myself, and the SIA team.

PNG vs JPG: Which Does Google Prefer?
How Long Does It Take For A Page To Index Using Different Indexing Methods?
Company
Resources
Products
SIA Login!
Learn