Will it pass juice? We confirm the result of test one with this second tests.
SIA Team
September 21, 2021 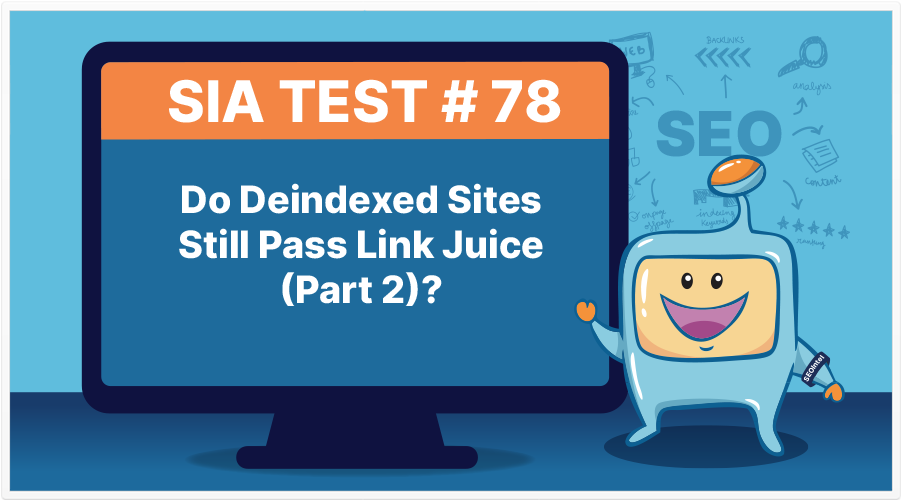 We showed a test last month with deindexed sites passing juice, but wanted to show the thoroughness of our work and double confirm for everyone.

We propose that a site that has been “deindexed” by Google will still pass link juice. There has been a lot of speculation in forums and blogs that deindexed sites do NOT pass juice.

We retest it to confirm the results of test one.

Five pages with the test keyword in 8 places and lorem ipsum text are placed on the test site and submitted to Google Search Console. Within 3 days, the pages are indexed and we added a link to each of the 5 deindexed sites, aimed at the #3 page.

One week later, the targeted page moves down one spot in rankings. Then, 1 week after that it moves back to position #3. 4 weeks later, the test page moved to the #1 position. Links from deindexed sites pass juice and still have ranking power.

In this video, Clint discusses this test and his insight on linking from deindexed sites.

If you’ve been following along, I actually shared this video, I want to say earlier on when we started the releasing of these tests, and this was one of the first few. And it’s actually a pretty cool test. So the idea is, let’s say, you have a private blog network and those are the people that approached us for this purpose. They had a private blog network, a lot of money invested in it. Google found the network and deindexed a lot of the websites but what they didn’t notice was a significant drop in the target. So conventional wisdom would be AI deindexed all these websites, ergo go all the links on them no longer count, and ergo, my target sites should drop.

Well, that didn’t happen. And so we wanted to figure out what the heck was going on. So Dori, at the time, used to have a significantly sized network and she was one of those people who lost her network, were most of it was deindexed. And so she had a bunch of domains sitting around for us to test out. So we created these two tests. And we did them back to back to make sure that we’re not just blowing smoke and – oh we found this one thing where it worked just one time, so let’s see if it doesn’t. We wanted to verify that this is a repeatable thing.

And it was, so the 5 test pages were created and submitted to search console, indexed, and then we linked to the number 3 ranking page from websites that were deindexed. They were not in the index, they were gone, they were deindexed, they were found out and removed, and built the links from those. And lo and behold, the SERP position went and shot to number 1. 3 to number 1.

So again, in this environment we’re testing a single variable, looking at weak keywords, there’s no competition, so that we can actually see – does it move or does it not? In this case, it moved up to position number 1.

I’m not saying go out there and buy a whole bunch of blown domains that are no longer in the index and then link to them, and that’s going to work for you. I’m not saying that at all, but I am saying that if Google finds your backlink, and it deindexes the link because it just doesn’t want it in the index anymore, you don’t necessarily have to freak out and try to go get it back in the index. Google knows the links there, go build new backlinks and it’s not going to result in link drops.

Now if your entire link profile gets deindexed, in one fell swoop, you might feel something, for sure. But in this case, in the application of deindexed versus indexed, I think that Google’s crawling them and then finding them, and may let it make its own determination if it wants to put the page with a link is on it into the index or not. And if it’s not putting it in there, but you’re still getting credit for the link, then it just kind of shows you that you don’t have to worry or stress too much about it.

Obviously, if you’re buying links and you’re spending a lot of money for them, you want them indexed. Because in theory, if you’re buying links, they are in good content, and they may have their own audience in there, you’re all trying to attract their audience to your offers. At the same time as building the backlinks, you’re doing marketing, versus just pure from outside of the pure SEO aspect of it, then you want it indexed. But if it’s not necessarily a great and wonderful site or whatever, and you just have a link on it and you want to help that link and add it to your link profile, don’t necessarily have to worry too much about indexing. Crawling might be just enough or getting it indexed the first time and not worrying about it ever again, might be just enough. And according to this test, I think it’s kind of what we’re getting out of this too, Google’s crawling those websites. They might be deindexed, but they’re still going there. There’s still reading them. They’re still looking at the content, they’re still analyzing it. And then somewhere along the way, a little button says – oh, this is on their list of bad sites and we’re not going to index it. Okay, and it moves on. But the backlink is still seeing and it’s still using it for ranking factors for the websites that have.