Do Sitewide Links from a Blogroll Affect Rank 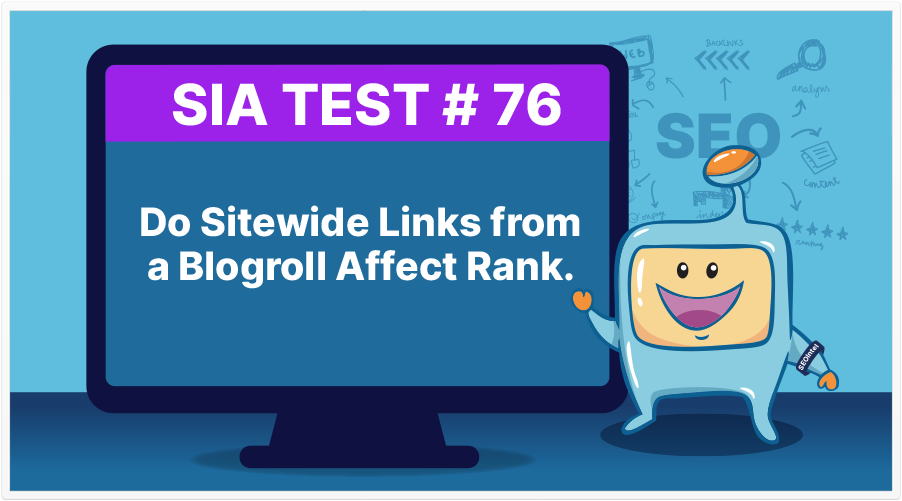 In 2013, Google rolled out an unnatural link penalty that appeared to target sitewide links in blogrolls and footers. The world of SEO freaked out. Sitewide links were declared the bane of SEO and an obvious indicator of black hat spam.

As time has gone by, the opinion of sitewide links seems to have rolled back into ‘they could be ok if they are natural.’ In most cases, the definition provided as ‘natural’ appears to equate to ‘one or two.’

We found an article from Search Engine Watch from 2014 that tried to stem the sky is falling talk in the middle of the hysteria. The ideas from the article appear to have become the party line with sitewide links:

“… one sitewide link, even if it produces tens of thousands of links containing an exact match keyword anchor, won’t cause Google to penalize you. The sites Google catches and penalizes have been involved in wide-scale cheating in order to manipulate their rankings. Someone linking to you with a sitewide won’t cause a penalty.”

Recently, we’ve seen reports of the benefits of sitewide links as a positive ranking factor. We test this out to see what the real deal is with sitewide links.

Five identical test pages were created and were all submitted to Google through the Google URL submit.

Next, the SIA blogroll link management tool was used to create a sitewide blogroll link pointing to the #3 ranking page. The anchor text used for the link was the target keyword.

It took a little while but we finally got positive movement and the test page moved up to the number 1 spot.

With the delay in rankings, our initial thought was that Penguin 4.0 was discounting these site wide links and the test page wasn’t going to move. Turns out, it was just timing.

One of the interesting impacts that we’ve seen in testing after Penguin 4.0 is that tests are taking a little longer to complete. While Penguin 4.0 is supposed to be “real time” it seems that there is something in the roll out to prevent real time algorithm probing.

In this video, Clint discusses this test and his insights on blogroll links.

This is Test #76 – Do Sitewide Links From A Blogroll Affect Rank?

If you’ve been around a while, essentially, you kind of know what these are. So you go to a WordPress site as an example, it’s the easiest example, and they have a related links post or a sponsored post or something to that effect with a link list of links to a bunch of different websites. And a lot of times, those are actually sponsored placements or buddies from networking, etc. And the question is, do they work?

There’s also been another plugin, that was out a long time ago, and that was essentially a reciprocal link network is kind of how I describe it, and you sign up to this network, and the other sites that sign up into it too, and essentially, you’re exchanging links. It’s not always a one for one thing, but you exchange backlinks. So if you’re posting 5 links, you’ll get a link from 5 other websites, for example, linking to your site. And that network actually was working pretty good until 2 things happened. One, they stopped policing the sites, that go in there. So you know, your legitimate, nice mommy blog, for example, could end up linking to a gambling site, etc. and that was devastating to that network. Because essentially, what happened is the users started leaving it- the good users, and then the trash sites, started getting put on PBNs, etc.

And then ultimately, people started or learned the footprint, and then reported it to Google and then Google set down that whole network of sites.

So if you were on there now, you were actually going to get detriment because those sites that they found on that network were demoted in power and that demoted power comes to you and it says look, you’re associated with this site that we know is bad, ergo, we’re going to penalize your site.

So, they’re not blogroll links in themselves, they are not something you can just take likely and blob up on on websites but they do work. Like in this case, in this test case, the blogroll moved the test page to the number one position. It’s not really saying a lot because obviously, we’re doing test page stuff but that kind of goes inside with testss like Ted Kubaitis did or real world applications where he was doing site wide footers. We did a site wide footer test for a page on Digitaleer at one point, and it is all gone by now. But we had a site wide footers for on page SEO guide on Digitaleer and it shot it up to the position number 15, which is actually pretty good considering that keyword is really link heavy, like it requires a lot of backlinks.

So this blogroll idea is something that you could probably still do. I would actually recommend it. So let’s say you own 5 websites that are good money makers. It’s not a “private blog network”. They’re just 5 legitimate sites that you own. Think Gawker they own like, what, 15 sites in that Gawker network and interlinking those and moving traffic from one to the other is totally acceptable. And doing that with blogrolls across your website, totally fine. Or networking with buddies and stuff and doing that, they can switch them to nofollow, we have a previous test on that saying it is not necessarily bad thing, it is not the end of the world, you could do nofollow and set up some networks like that, some reciprocal networks with your buddies, and move that along pretty well.

You can also do it if you’re a small business owner, you could do it with other businesses in your area. So if you’re a plumber who knows a fencing guy, and you can do the blogroll thing with them. An electric guy, you can do it with them. The contractor that takes care of the cabinets, the cabinet maker, you can do it with them. All of these other subcontractors that work with you to complete your plumbing work or to help build and complete those plumbing projects, you can interlink everybody and leverage that as a team. You’re working and you’re getting customers, you’re doing client work, as a team. Why not do the same thing with your business building and your marketing, and in particular, your SEO, by leveraging the blogroll on your website.