Does the Use of SocialAdr Affect Rankings on Google?

Is the tool worth adding to your link building arsenal?
SIA Team
August 6, 2021 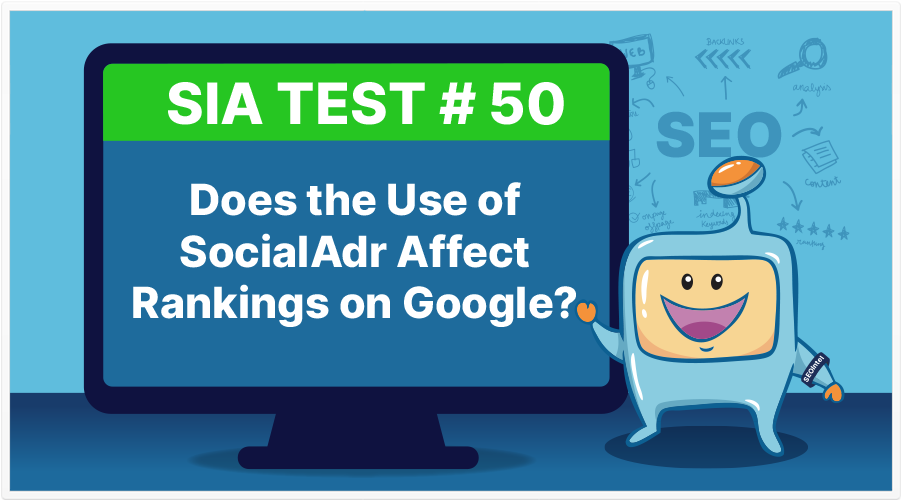 SocialAdr is a social bookmarking platform that uses sites like Delicious, Tumblr, Stumbleupon, Pinterest, Facebook, and other social media sites. Basically, you sign up for the service and real people who have real accounts go and post your links with a blurb and link back to where you want to go.

In this test, we check if the use of SocialAdr has a positive, negative effect, or no effect on rank.

There are a total of three tests under this test. All tests used 5 identical test pages and the 2nd or 3rd page were chosen to receive the links from SocialAdr.

After all the pages were indexed in Google, the #2 page was chosen to be the test page that would receive the SocialAdr links.

For test one, the description used was lorem ipsum and the same content was used for all postings (duplicate content). A total of 386 SocialAdr links were set and after the last link was posted, all the links were submitted to a link indexer.

Two days in the campaign, the test page dropped to the 4th position but within the week, it rose up to #1 and has stayed there.

Test Two: SocialAdr with English and No Indexer

After all the pages were indexed in Google, the #3 page was chosen to be the test page that would receive the SocialAdr links.

For test two, the description that was added into the SocialAdr dashboard was real English. The spintax feature was used to make the description different across the sites. After the spin, there were some errors with the word “and” being read as html code. These errors were left in the assumption that a novice user might just leave it as is.

The difference between test 1 and 2 is that, this test was ran as if we were a novice and the content was in English and was spun using to SocialAdr’s internal spinning function. A total of 277 links were built and all links were left as is, meaning, no indexer was used to index the links that were built.

After a few days of the SocialAdr campaign, the test page disappeared from the listings. Two days later, the test page appeared in the #2 spot and has stayed there.

After all the pages were indexed in Google, the #3 page was chosen to be the test page that would receive the SocialAdr links.

For test three, the description that was added into the SocialAdr dashboard was real English. Same as with test two, the spintax feature was also used. This time, the errors were cleaned up so that it read well. A total of 38 links were built and after the last link was posted, all links were submitted to a link indexer.

This test represents unique and readable descriptions along with links being submitted to a link indexer. However, this test also has a low volume of Socialadr links, being at just 38 links.

The following day, the test page jumped to the #2 spot, which was opposite of what we normally see. But then a day later, it returned to the #3 spot and has remained there since then.

SocialAdr receives SIA Thumbs up. The three tests used different variables and we are confident in saying that SocialAdr does produce positive ranking signals. Here are three best practices to follow to ensure that you get the best ranking boost:

Note that you will experience transitional rank with SocialAdr so don’t freak out when you experience an initial drop or if you disappear for a while. Transitional rank, or the ‘Google Dance,’ is when your site drops, often a large drop, while Google assesses the introduced factor that appears to be providing a positive signal on your rankings.

This tests was done in 2016 and in this video, Clint discusses this test and the results back then. He then shares his more recent experience with the tool and provides some updates.

I reduplicated this test in 2020 and I can tell you that the effects are entirely different today than they were back then and it was a total complete waste of money for me.

But today, let’s look at this particular test and see the results.

One is SocialAdr with duplicate content, remember we talked about using spin features and stuff like that? Well, in SocialAdr, you can create essentially where they are bookmarks and you can spend a description or just use that across the range of all of the bookmark sites.

In my opinion spinning doesn’t really matter all that much in regards to bookmarking sites, you’re going to promote your website in the same way across multiple, multiple platforms. So it’s kind of natural to have something that’s not spun, right?

The other one is with English, so versus a lorem ipsum set up and just using English, but you’re not indexing them in any way and you’re just creating the backlinks. And the other one is just a lower number of links, versus this one was 277 and I think this was only 38 links. And if you’re not aware, in SocialAdr, you can change the amount of links that it builds.

In regards to the test, all three of them jumped up to the top here, I believe, here’s the test one number one position, number two position, and then this one, the number three position. So the conclusion was it does positively influence their ranking results.

In my opinion, three, two and one does not make a good service because of consistency.

The idea is that they have all of these social accounts, either their member accounts, or they’re just some that are part of their automation machine and then they’ll go out and promote your link on these social media accounts, hopefully driving traffic and obviously building backlinks.

Today, however, their list of websites is absolutely atrocious. There’s no traffic coming through this service whatsoever that I could see and I’ve pumped in probably, I used it for two months as part of the test and I used it on probably well over 100 different pages and bookmarks, and created an average of 250 bookmarks each one of those pages and I saw nothing good out of any of the results of being on those websites or being on those social media accounts. There’s no traffic, there’s no ranking boost even when you’re trying to boost them up with tiers, zero effect whatsoever.

So hopefully that helps you out. Hopefully we’ve saved you a little bit of money. Again, if you want to do something like what SocialAdr is doing, build a little bit of a network, get your friends together, maybe 5-10 friends are all in the same market or similar markets, you all have traffic and stuff and you just want to piggyback off each other. Totally fine doing that and you don’t even have to do that with your competition. You just have to be in the same niches and you just share across different social media platforms and just get a little bit of benefit, get a little bit of promotion and make sure to also have your own promotion network, you own social media accounts where your traffic is, where your visitors are, and use those and you’ll save your time, money, and effort versus using something like a SocialAdr to do it for you.

SocialAdr is just one of the tools we’ve tested in the SIA. There are a few more. Curious if they moved the needle and are worth applying to your link building strategy? Check out our other tests.

Does Compressing Images Boost Rankings?
Do You Lose Link Strength When You Use A Link Shortener?
Company
Resources
Products
SIA Login!
Learn