Which Link Shortener Is Better When Linking from A Google Doc?

Should you use a link shortener for Google Doc links or not? If so, which is the best
SIA Team
August 17, 2021 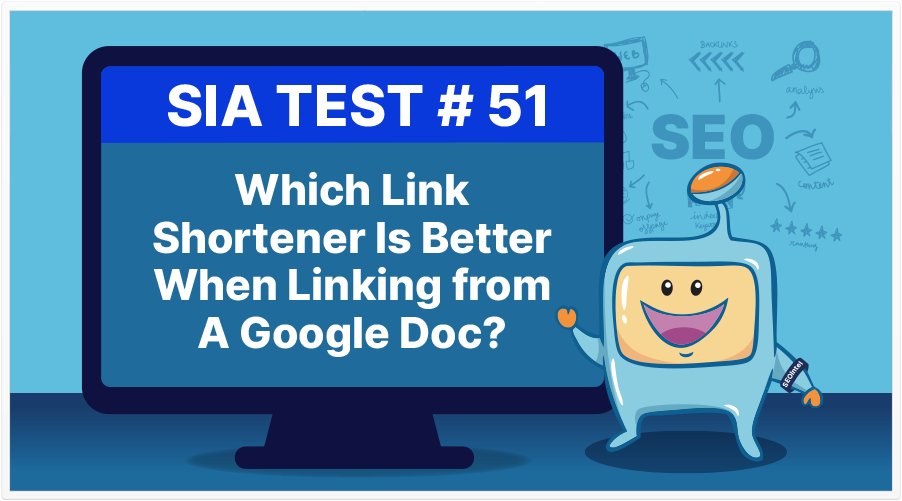 In performing an earlier test with Google doc stacks, one of the things we noticed was that a Google doc with a raw URL got indexed faster than one with an anchor text. Interesting to note – and there was some talk in a Facebook group that as SEOs, we didn’t want to use a Google shortener because Google owned it and therefore it would be suspect.

In this test, we settle the score once and for all to see which is better when linking from a Google Doc – using a raw URL, a Google link shortener, or other popular link shorteners were testing – Bit.ly and Capsulink.

We looked at the trust flow/citation flow of the three link shorteners we tested and saw that Google has the highest value.  Does this mean the link shortener from Google will be more valuable when it comes to passing of link juice?

There are three variations for this test and each test variation has 5 test pages that were indexed and then a Google doc was created (different Google drive accounts) and each with a link to the test page.

Why we used different Google Drive Accounts for the test

In previous tests, when videos came from the same YouTube account, other videos would start to rank for a completely separate keyword. We assume this is due to the channel power as more videos were added and all the cross linking within YouTube from each playlist, suggestions, etc. In a test related test to this, we used different YouTube channels and thought that it only made sense to run this test also using different Google drive accounts.

Why use the #4 spot for the test page?

Since we’re not sure about links from the various services, picking the #4 spot gives us the ability to see if any service would be detrimental. If it is negative factor, it would go down. Linking to the #4 spot gives it space to go up or down.

The bit.ly link shortener was sent to the fourth ranking page.

Around two weeks after the test, the test page rose up from #4 to #3.

The Google link shortener was sent to the fourth ranking page. Around two weeks after the test, the test page rose up from the #4 spot to the #2 spot.

The Capsulink link shortner was sent to the fourth ranking page. Around two weeks after the test, the test page rose up from the #4 spot up to the #3 spot.

Google shortener rose higher than the two, from #4 to #2.

From previous tests, when using a ‘regular link’ from a Google doc, we usually see a two position jump. It appears that bit.ly and Capsulink might hold back the full amount of juice sent from the doc.

However, the Google shortener seems to transfer the full amount of juice.

One advantage to Capsulink is that you can change the destination url so there could be value in losing a little juice but being able to use the link multiple times and just relying on link echo.

For now, we would use a regular link in Google docs unless there is a compelling reason to use either a Google shortener or Capsulink. We would avoid bit.ly for now.

So what does Clint have to say about this test and the use of shorteners for Google doc links? Check out the video below.

Test number 51 – Which Link Shortener is Better to Send to a Page You’re Trying to Rank from a Google Doc?

So in short, we know that Google Doc is passing link juice to pages that obviously – you link from the Google Doc to a money page or another backlink or whatever and it does have some value.

It’s not a lot, it was actually probably less now than before because it was such a spammed method. I’m not gonna say necessarily spammed, just a lot of people were using it and they’re using it willy nilly. Eventually, Google gets tired of that and then we’ll kill the value or some of the link value, or all of the link value of the property based on the amount of abuse that property gets in order to kind of clean that up and clean the reputation of that system.

This test here is looking at the value of link shorteners to use when you’re doing your linking out, so that you can do a few things. One of the primary things here, especially if you’re using a premium service ia you can actually change the location that you’re linking out to.

Let’s say you’re doing a lot of niche work and you’re only promoting dentists, for example. Well, if you’re only promoting dentists, you can buy a premium service like Capsulink, that’s the one that I use. I believe Bit.ly lets you do it too. Not entirely sure, I haven’t used Bitly in a while. But you can change the URLs that the service is pointing to, in order to move link juice around from different things.

Let’s say you build a Google or link network of 50 links, you’re doing a combination of guest posting and all kinds of other stuff. You just send out that one capsule link and say that client quits or that website gets messed up or whatever reason that would require a need for change for that URL, you can just go into one Capsulink, change the place, the location that the 301 is pointing to from the shortener and point it somewhere else.

In theory, if you get all those links re crawled and everything Google will see the passing, will redirect where that link juice is giving credit to, etc. Now, I don’t do that method a lot. But frankly, I think at some point, it just kind of washed out and Google’s like- well, this used to be this but now it’s this, it’s kind of weird.

But monitor those and use them sparingly, Google notices and kind of treats that as – oh, you updated it and you made it more worthwhile. So something to keep in mind.

Anyway, this tested Bitly. It tested the Google link shortener if you remember that one – Goog.le. And then the Capsulink. Google link shortener is no longer around. There are some variations of it but mostly it’s from sharing Google properties. They pretty much killed it for public access. Bitly is still there, for sure. And like I said, I’m still using Capsulink, which is pretty good.

So a four to three or a four to two, not really all that impressive to me. Like I wouldn’t even mess with it at that point. If I was doing it and I had no intention of doing anything else to that Google Doc, i.e. tiers, links, etc. This would be a busts for me, it’s just not worthwhile to take all the extra time to set up the Capsulink and do that, and send it from the Google Drive or Google Doc, where I can just link directly to the Google Doc, or from the Google Doc to my money page, without having to do all that the 301 stuff.

There are some things you can probably do with this, though. One, see about making the keyword in the URL on 301,  see about the anchor tags and see about sending more links to the Google Doc in order to boost the power of the Google doc and see how well it passes through different link shorteners. So that would be a good follow on test, in this case.

But other than that, I would say this is pretty much, from an SEO perspective, from a link value perspective, kind of a waste of time. Unless you are creating networks and you want to be able to change the URLs, you’re really not going to get any benefit, just pushing it through these 301s from, in particular the Google Doc. But it definitely could be tested from other platforms.

But right now, I would just say, unless you are rotating URLs and stuff, don’t even mess with this step. If it’s four to three or four to two, in a fake keyword with zero competition, that’s not enough value for me to add that into my SEO piece, for sure.